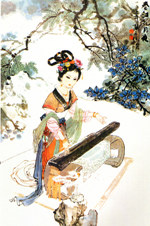 As a Chinese old saying goes: 一白遮百丑(Yī bái zhē bǎi chǒu ,White skin removes all ugliness). Chinese people have black hair, the contrast of black hair and white skin is really attractive. So White skin without freckles has historically been prized as beautiful in China, and the concept is widespread in other Asian countries, such as Japan、Korean, as well. An early Chinese woodcut scroll《百美新泳图传》（Bǎi měi xīn yǒng tú Zhuàn，New Chants of a Hundred Beauties ）, first published in 1792, mentions one of the fabled beauties of China, empress of Han Dynasty Zhao Feiyan , as having “细腰雪肤”（Xì yāo xuě fū ，slender waists and snow-white skin）, attributes that became among the “Ten Commandments of Classical Beauty” in ancient China. That image of beauty has endured over time.

In traditional Chinese medicine, meanwhile, there are recommendations for eating pearl powder for lighter, people would actually crush pearls into powder that they would then swallow in hopes of attaining whiter skin. more lustrous skin in the medical compendium本草纲目(Běncǎo gāngmù); for an herbal concoction for lighter skin from a Ming dynasty medical reference, 医药入门（Yīyào rùmén Introduction to Medicine ）; and for a三白汤(Sān báitāng ，Three Whites Soup), containing white peony root, white atractylodes, white tuckahoe and licorice.

Chinese female take care of their skins. Skin softness is important. A whiter skin is supposed to be softer. It is also important not to have wrinkles. Chinese people don’t like dry skins. So in the summer, some of Chinese female shield themselves from the sun – shielding themselves from UV rays which dry out skin and cause facial lines, freckles and sun spots on skin, making faces look darker and older. Which also explains why do Chinese people look so young sometimes.
As a matter of fact, Most Chinese (North, East and Central) appear to have light skin。 In the past, Chinese used以玉为骨雪为肌(Yǐ yù wèi gǔ xuě wèi jī)to describe women, meaning “use jade as bone and snow as skin”. This is largely due to the dominant civilization in Central China, Northern China and Eastern China, where people tend to have pale white skin, rather than in the South that borders Vietnam, where the mixed residents tend to have darker skin.
While Southerners of China , especially Cantonese tend to have dark skin. Most Chinese residents living overseas, particularly decades ago mainly descend from Cantonese. Hence the public image of Chinese people having dark skin in the West.

The whiter it is, the more beautiful and healthy looking you are.It’s a cultural beauty standard— much like tanning seems to be for many Caucasian girls.