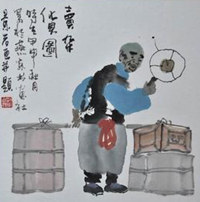 Times change, and, though in Bedford to-day no itinerant tinkers roam through the streets, if we were to sit at the corner of any sunny street in China, it would not be long before the familiar ‘ching-chink, ching-chink’ of the traveling tinker would be heard as he walked along, bearing on his shoulders, suspended at either end of his carrying pole, his portable stove and complete outfit for mending pots or pans, or for attending to any of the innumerable little jobs that fall to his lot.

So much for the tinker, but then China is full of itinerant craftsmen and sidewalk salesmen, so much so that probably no country in the world can even approach her in the number of these or in the variety of things they offer for sale. Some will sit all day beside their small stock-in-trade and never say a word until someone comes to buy, others are rarely ever silent and squat on their haunches singing a never-ending song about the quality of their merchandise.

However, in spite of the immense diversity of the things they have to sell, they fall readily into three classes: first, those who sell food and drink, forming quite the largest section; next, those who sell articles, in the manner of the old fashioned pedlar, from silks and satins to nuts and bolts; and finally, those who sell “service” (though that has a very modern ring about it), such as our friend the tinker, the letter writer, the shoe-maker the fortune-teller or the man who so deftly mends one’s broken cups. It is a kind of traditional situation that people went around with hawker wares and hawker was establishes as one of Beijing’s cultural legacies in 2007.