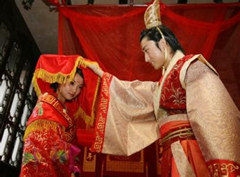 Ever since ancient times, there has been a saying that the three most delightful moments in one’s life come with success in the imperial examination, marriage and the birth of a son. From the Qin (221 BC – 206 BC) to Qing (1644 – 1911) Dynasties, the feudal system dominated over two thousands years. During this period, the importance of getting married was far more than that a person found his better half. For the male side, it determined the prosperity and even the future fame of their family; while for the female side, it meant that parents lost the chance of seeing their daughter for a long time. Thus to choose an ideal partner was vital for both the individual and the family.

In feudal society, a marriage would be decided not by a young couple’s love, but by their parents’ desires. Only after a matchmaker’s introduction and when parents considered the two family conditions were similar and could be matched, would the marriage procedures go forward. Conditions that should be taken into consideration included wealth and social status. If a boy’s family was well-off or an official family, his parents would never permit him to marry a girl from a poor family. Essential to the marriage process were the commonly recognized ‘three Letters and six etiquettes’.

The three letters were the betrothal letter, the gift letter with a gifts list and the wedding letter used on the day the groom met his bride at her home.

Six etiquettes then led to the final wedding ceremony

Of course, marriage customs differed by region, but these were the most common. They have been maintained for thousands of years, but in recent years (especially after the founding of modern China), people have tended to discard some of the details and advocate simplified procedures and wedding ceremonies.