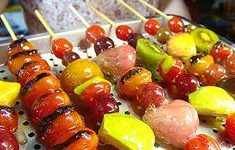 糖葫芦（táng hú lu）, also called 冰糖葫芦（bīng táng hú lu） , is a traditional winter snack in China. It is commonly available in many Chinese cities, such as Beijing, Tianjin, Shanghai, and other Chinese cities. It consists of candied fruits on bamboo skewers that are approximately 20cm long. This snack can be found widely along the Beijing snack street Wangfujing and also there are street vendors who travel from place to place selling it.

Tanghulu typically has a hardened sugar coating that comes from dipping the skewer in sugar syrup, but versions can also be found with a second chocolate coating, or sesame sprinkles. Traditionally, the fruit used is Chinese hawthorn, but in recent times vendors have also used mandarin oranges, strawberries, blueberries, pineapples, kiwifruit, bananas, or grapes, making this traditional snack fancy and colorful. 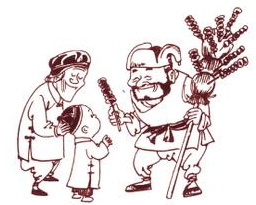 Every winter, Tanghulu becomes popular in almost every street corner of the city. This snack can be found along the Beijing Snack Street of Wangfujing, and there are also street vendors who travel from place to place selling it. Mobile food vendors carry large straw or plastic poles with dozens of Tanghulu stuck in them as they make their rounds from one neighborhood to another. Each vendor has his or her own distinct and rhythmic call. Moreover, many food stalls in parks or in supermarkets add Tanghulu into their menus, and customers can watch the stall owners making this snack on the spot.

Though tanghulu can also be found in many other cities in North and Northeast China, it has become sort of unofficial, non-dancing logo of Beijing. For many Beijing residents, it is not only a tasty treat, but also an auspicious symbol and highlight of the traditional temple fairs held during the Spring Festival holidays in Beijing. In many Beijingers’eyes, the tanghulu sold at the Changdian Temple Fair in Xuanwu District is regarded as the most auspicious ones. Thus you can’t miss the good taste of this Beijing snack when traveling in Beijing.