Learn about the Hutong in Beijing


The Hutong in Beijing

People say that the real culture of Beijing is the culture of the Hutong and Courtyards. How true that is. They attract more tourists from home and abroad than the high-rise buildings and large mansions. 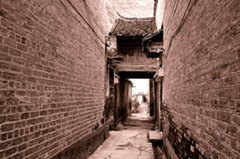 Hutong is a Mongolian word meaning water well. At nine meters (about 30 feet) wide, it is the name given to a lane or small street that originated during the Yuan Dynasty (1271–1368). Now they have become representatives of Beijing’s culture, thus it is the first choice for people who would like to learn about the local history and culture.

In the Yuan Dynasty, Mongolians attached great importance to water, so almost every community in the city was designed around a well, which provided the daily water for the locals. Until now, one can still find dry wells in Hutongs.

In the past, Beijing was composed of hundreds of courtyards around the Forbidden City, and these lanes stretched out in all four directions, connecting the different kinds of courtyards in the city. Although originally formed in the Yuan Dynasty, the building of the these developed fast during the Ming and Qing dynasties. In the Yuan Dynasty, there were about 29 Hutongs, while in the Ming Dynasty (1368 –1644), this number increased to 1,070. In the Qing Dynasty (1644–1911), it grew to 2,076. It is said that by 1949 there were as many as 3,250. But with the passage of time, and the requirement for city construction, the number of them has fallen dramatically. In 2003, only 1,500 were left, and now no more than 1,000 remain. Thus, protecting them is an urgent problem for modern people. 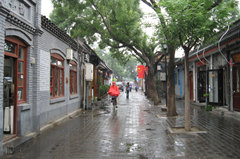 The lanes have their own layout and structure, and when viewed from the air the combination of the lanes and courtyards resemble a chessboard with delicate gardens, fine rockeries and ancient ruins this makes them a wonder in the world. Because of the cross interlacement of the lanes every houses connected to the other, making it easy for local people to keep in touch with their neighbors. Therefore, once one enters any of the lanes, one can feel the deep and warm relationships among people, which is rarely found in this modern world.

In the twisted lanes one can experience the life of the ancient Beijing people. The bathrooms and public toilets can be found in these lanes. Shops sell all kinds of goods that satisfy the local people’s daily needs. It is just like a community. Gossiping in these lanes is a common scene as it is the main way for people to strengthen their relationship. These lanes have witnessed the development of Beijing. Where there is such a lane, there is a story.

The naming of these different lanes is very interesting. In ancient times the names of them were passed by word of mouth among people; there were no signposts. It was not until the Ming and Qing dynasties that the names were written down gradually. Generally speaking, the naming methods can be categorized into ten kinds. Some main naming methods were to name them after the symbol construction in a lane, the local language, the markets and the local positions. For instance, the Skewed Tobacco Pouch Street, also called Yandai Xiejie, was named so because it is not straight. Mamei Hutong was named after the old Beijing language. In later years the government changed their original names into more formal ones, which sounds more refined. 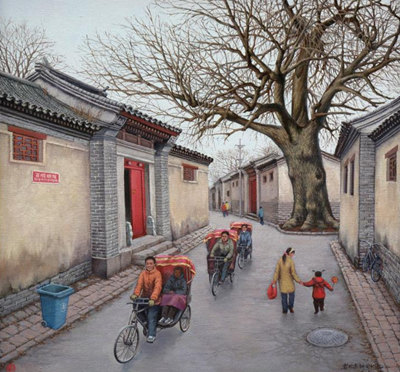 Of the more than 1,000 Hutongs left there are some distinctive ones, attracting thousands of tourists from home and abroad. The longest one is the Dongjiaominxiang Hutong, with a total length of 6.5 kilometers (4 miles), lying between Chang’an Avenue and East and West Qianmen Streets. The shortest one is the Yichi Street, measuring about 25 meters (82 feet). The Jiuwan Hutong, with about 13 turns, is the most tortuous one and can easily make you lost. The narrowest is the Qianshi (Money Market) Hutong, measuring about 30 to 40 meters (32 to 44 yards), located in Zhubaoshi Street outside the Qianmen Gate. The narrowest part is merely 40 centimeters (16 inches) wide, so when two people meet, they must turn sideways to pass each other. The widest one is the Lingjing Hutong in Xicheng District. The one with the longest history is the Sanmiaojie Hutong, whose construction can be traced back to the Liao Dynasty (907–1125).

In addition, there are many small, unique and well decorated shops hidden in these lanes, especially in South Gong and Drum Lane (Nanluo Guxiang). There is a famous restaurant called Pass by Bar in South Gong and Drum Lane, which is a gathering place for the local people and foreign backpackers. Yizhan, a themed bar in No. 30 Beixinqiao Toutiao (two to three walking minutes from Beixinqiao subway station), is built based on an old courtyard. Apart from these special modern-style shops, there are some more traditional shops scattered in the lanes, recording the history of Chinese life. In Mishi Hutong, a barbershop called Yunfeng (Cloud and Wind) Barbershop, has been open since 1989, and all the equipment in the shop was bought at that time, giving customers a feeling of traveling back in time.