How to Say Mother-in-Law in Chinese

Many western countries accept hugs and kisses as a popular form of greeting although a handshake is still the formal way of greeting people. In China, a handshake or a simple and kind salutation is common. 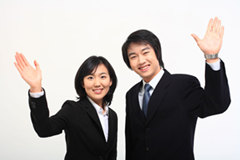 A form of address is to some extent a reflection of social climate. In China, various forms of address are used according to circumstances. Choosing the appropriate and correct form shows your wit and high respect to others. Generally, for Chinese people it should be in accord with convention and care much about the personal favor of the people being addressed. There are four main categories:
Job Title: You can call someone directly by his job title or put it before his surname or full name. This is often used in the workplace and on more formal occasions:

To address based on professional qualifications, which expresses respect to those being addressed:

Generally, you can call others by their family name or full name by putting the Mr. or Ms. in front. This is the general address most widely used in company, hotels, stores, restaurants, karaoke, bars and other places.

A smile, good eye contact and politeness are expressions of sincerity. These are the beginning of communication. Just like westerners, the Chinese usually pass the time of day with one another as a precursor to getting to the point of a conversation or presentation.

Different conditions require different styles in which conversational greetings may be exchanged. When you meet someone for the first time, the most commonly-used words are:

For greeting acquaintances, the words will be more informal and friendly like the following: