The Etiquette of Fighting for a Bill 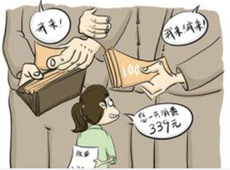 It’s not uncommon to see people fighting over the bill in Chinese restaurants. They will try to pull the bill away from someone else at their table and shout with red faces at each other. It is considered polite to offer once or even twice to pay the bill, even if you are the guest. There may be very loud protests to show that they are sincere in wanting to pay the bill themselves, but often it is just a bluff.

Generally, Older pays for younger, men pay for women, asker pays for askee. Nevertheless, whenever someone offers to pay the bill, fight them (physically if necessary) for the honor. If you lose, you pick up the tab next time. If someone says they have to “go to the bathroom” near the end of the meal, make sure they’re not sneaking over to pay the bill. Feel free to split the bill if eating with coworkers or friends with whom you have an understanding.

When to Offer to Pay

A good rule of thumb is that you should always offer—even if your friend invited you, or if you’re the younger, poorer party. It’s just good manners. But there are some caveats.

With someone older, like a family friend: When the bill comes, take out your wallet as if you’ll pay, but when they say they have it, don’t bother arguing and say thank you. If this is someone who habitually buys you meals and you want to say thank you, it’s best to sneak off and pay the bill near the end of the meal. This way you can avoid an embarrassing argument.

For someone’s birthday: Contrary to Western rules, the birthday girl or boy should pay for a birthday dinner. However, friends should all bring gifts to pay them back.

On a date: Gender equality doesn’t extend to romantic dinners in China. Girls need not even pretend as though they’re going for the bill—guys pay, and if a girl insists on paying, that means she’s not interested in the guy.
At a party for you: Moving out of town? Leaving your company? Let your friends buy you dinner; you’re not obligated to pay.

Business meal: This is a true standoff. Unless you’re doing someone a big favor by having a meal with them .you’ll likely be forced to fight over the bill. There are several factors to take into account: who asked and who accepted, whose turf you’re on, who wants what out of whom. This is a time to dig in your heels and make use of all your tricks.

How Far to Go

This is where it gets embarrassing. You want to put in enough fight to be polite, but not so much that you draw the attention of the whole restaurant.

How many times to offer: Twice. Possibly three times if the bill is expensive.

Whether to get physical: It’s best only to get physical (shoving and grabbing hands) with friends. Protest verbally and even gesticulate wildly with a business acquaintance, but don’t touch them. Also refrain from shoving money in someone’s pocket or sneaking it into their belongings. As one of my colleagues sensibly noted, “What if they just thought it was their own money?”

Secret payment: This move is best to use with acquaintances who you know will argue for the bill or for business meals. It usually isn’t necessary to use with friends unless you have a particularly determined friend who likes to pay every time.

What to Say When You’ve Failed Well, you gave it your best shot, and you failed miserably. Now it’s time to take it like a man. Some polite phrases include: