Okay, so you’re getting there with the pronunciation, the tones still give you a headache (maybe they always will!?) and you’re getting to grips with the grammar. So far, so good. But, now, what you really need is to boost your vocabulary, and this can be difficult.

There are typically two approaches, firstly to memorize lots of characters. Text books provide long lists which your language teacher may ask you to remember. Mine did. I noticed, whilst in China that many Chinese students studied English in this way. I’d walk past students repeating lists of English words. One guy even pulled out a tape recorder and asked me to translate a number of sentences which he found difficult. This method can be rather dull and boring, and often not very practical.

I remember one of my first text books taught me how to say ‘sandwich’ and ‘hamburger’. Two foods that I never ate in China. I wanted my books to tell me what those noodles were that they cut with a knife, like in the KungFu film Iron Monkey, they’re called 刀削面 (dāoxiāomiàn) by the way. The first time I ordered those noodles I had to mime the action to get what I wanted – hysterical for the Chinese people in the restaurant and embarrassing for me!

The second way to increase Chinese vocabulary tends to be much more exciting. It involves going out and getting in to conversations with Chinese speakers; very easy when you’re in China, harder when you’re not! These conversations will reveal, very quickly, the holes in your vocabulary. The pain of not being able to express your opinion, or answer a question, will make it easier to look in the dictionary, find the expression you want, and retain that information for next time.

So, the problem looks like this: How to increase our vocabulary without memorizing long lists of characters? And might there be a more efficient way than getting into random conversations? Anki answered this question for me. Anki (logo below) is a free to download flashcard program that uses an algorithm to space the flashcards intelligently so you don’t continually study cards you know. This great little program can be used on almost any platform. I have a copy on my computer and on Android. It also has a version for Apple products, so there’s no excuse not to try it.

First, download the program to your device, and then download a ‘Deck’ of flashcards to study. In particular, I’d suggest using the decks called ‘Mastering Chinese Characters’. There are 10 decks, each with about 1500 flashcards. This should keep even the most committed learner busy for the best part of 6 months. The first deck is the easiest and the 10th the hardest – as you would probably expect. There are of course many other decks, some exploring the stroke order of characters, the components of characters, as well as others which test pronunciation and character definition. Take your pick. Look around and choose the deck that’s most suitable for your level and aspirations.

In the beginning I’d suggest picking either a number of new cards to study each day, say 50, or set a specific time for studying, say 30-60 minutes. At 50 cards a day each deck should take about a month, by which time you will really know the characters in that deck, and your Chinese vocabulary will have improved greatly. 50 cards may sound like a lot, but if you have Anki on your mobile device, there are numerous moments throughout the day when you can take a few minutes to study 10 cards and then 10 some time later. Before you know it, you’ve done 50. 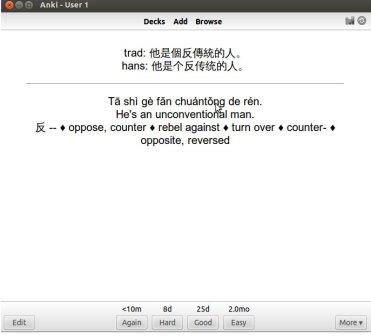 There are, of course, a few drawbacks to this system. The third deck of the Mastering Chinese Characters has six different flashcards with characters that have the pronunciation ‘Jì’! So, when you’re being tested on the pronunciation of a single character, without being able to see the character; you have a problem. Which of the six is it? Well, you can either ignore the question, or if you’re really committed recall all six when you attempt to answer that particular question – the latter, in the end, improves your vocabulary.

A final word of warning, if you’re studying 50 new cards a day, after week 2, you could have a maximum of 700 cards to review, plus the 50 new cards. So control the maximum number of reviews per day in the deck options tab, otherwise you can easily get bogged down with reviews and become disheartened.

(Please note that many of the cons on this list are related to using the Mastering Chinese Characters decks, and may not apply to other decks.)

Studying in this way creates what I call a ‘stored memory’ of Chinese characters, expressions and sentences. These characters are not part of your ‘working memory’ just yet, but they’re waiting to come forward to help you understand. And they will come forward as you watch / listen to films, TV programs, Chinese speakers etc. The ear begins to pick out the expressions studied and it then takes only a few seconds (sometimes minutes) to recall the characters from the ‘stored memory’. This process of recalling characters moves the information from ‘stored memory’ to ‘working memory’. Once you begin to recall the expressions in active conversation the vocabulary becomes forever yours.

Anki may not be the answer to all your Chinese problems. Use it wisely and it becomes an excellent adjunct to your studies. Give it a try and let me know what you think.

Alistair began his Chinese studies at Tianjin Technology Univeristy in 2007. In 2008 he obtained a Masters degree in Classical Eastern Literature with a speciality in classical Chinese. He is an avid reader of Chinese literature and this year he began a personal translation of the 'Simple Questions', the first part of the Yellow Emperor's Classic of Internal Medicine.