A radical is collection of brush strokes in Chinese that conveys a certain meaning. Radicals are combined to form characters, and recognizing a particular radical can often give you a clue as to that character’s meaning. Some radicals can even stand on their own as characters themselves!

One of the best examples to demonstrate how the radical system works in Chinese is the “water” radical. It is the second most commonly seen radical, and when combined with other radicals, produces almost a quarter of the entire Chinese dictionary!

The Kangxi Dictionary alone lists 1,595 Chinese characters under the “water” radical. As you might expect, many of them have meanings somehow related to water or liquid. For some examples, check out the characters below.

清 – qīng – clear, transparent (what else is clear and transparent? That’s right – water!) 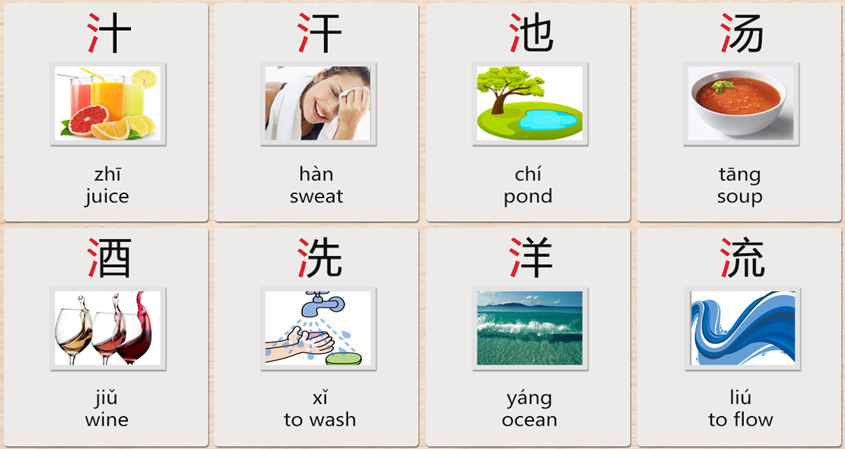 Fun Fact: The character 渴 (kě) which means “thirsty” has the “water” radical, while the character 喝 (hē), which means “to drink,” is listed under the “mouth” radical. If you need “water” and are feeling very渴，you better use your “mouth” to喝 some! 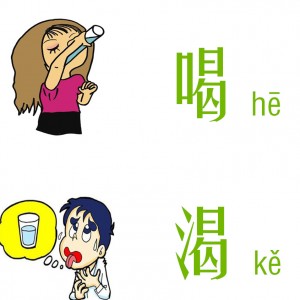 As you might know, the “water” character looks like 水.In the Chinese “Five Phases” system of elements, as well as in the Bagua trigrams, this symbol is used to represent the element Water.

However, in most Chinese characters it is simplified to氵, a radical which is colloquially referred to as “three drops of water” (三点水 – sān diǎn shuǐ), and symbolizes flowing water. 氵usually appears on the left side of a Chinese character.

Meanwhile, the original character of水is used as a radical, too. It is typically placed at the bottom of the character, as in 泉 – quán – “Spring.” However, its position is not fixed.

Quick Tip: Make sure you don’t confuse the “three drops of water” radical with冫 (两点水 – liǎng diǎn shuǐ – “two drops of water”), a radical that means “ice.” The most commonly used character that uses the “ice” radical is 冰 – bīng – which literally means “ice,” “icy,” or “to freeze.”