The word “help” can be translated as either “帮助” (bāngzhù) or “帮忙”(bāngmáng) in Chinese. But when you want to say “help him”, you will be corrected by your Chinese teacher if you say 帮忙他 (bāngmáng tā). There is a reason why you can only say 帮助他 (help him) although帮助” (bāngzhù) and “帮忙”(bāngmáng) have the same meaning. Even more advanced students of Chinese may find this confusing.

There are a special group of verbs in Chinese called “separable words”, or 离合词 (lí hé cí). They are different from general verbs, and may seem like one of the most difficult aspects of the Chinese language. The word “帮忙” (bang máng) belongs to this category of verbs. I will illustrate for you what separable words are, how to use them in sentences, and explain the contrasts between separable words and general verbs. (Besides the detailed explanation about the Separable Words, you can also check more HSK3 related grammar tutorial videos at here.)

Take “帮忙” (bāngmáng) as an example. This word consists of two characters “帮” (bāng) and “忙” (máng) . These two characters can be used together, such as:

Yet, the two characters can also be used separately, such as:

This is another situation that is not covered in this article.

But how do you judge whether a word is separable or not? Here is a trick: The first character of a separable word often indicates an action, and the second character is often a noun which is affected by the action word in front. For example:

These all belong to separable words. “见”(jiàn), “握”(wò) and “跳”(tiào) are all verbs. “面”(miàn), “手”(shǒu) and “舞”(wǔ) are all nouns. But this trick does not work for all separable words. It must still be said that the most effective way to know separate words is through experience and daily learning.

The common usages of separable words

(1) We often place modifiers between the two characters that make up a separable word, such as dynamic auxiliary words like “着 (zhe), 了(le), 过(guò)”; complement words of momentum like “次”(cì); quantifier complements like “一个小时(yí ge xiǎoshí) and 三天(sān tiān)”; directional complement words like “起来(qǐlái), or 下去(xiàqü)”. Here are some examples:

a． 我们见过面。(Wǒmen jiàn guò miàn.)
We have met each other.

But the two characters of general words cannot be separated. Instead, we can put modifiers behind or after the general verbs. Some examples:

But if “AB” is a general word, its overlapping form should be “ABAB”. For example:

It’s such a complicated problem that we need further discussion before making the decision.

(3) When there is a complement of momentum or quantifier complement to modify the separable word, you can put the modifier between the two characters. You can also repeat the verb in front. For example:

Note that if there is a state complement, you can`t put it between the two characters any more. The only usage is to repeat the first character of the separable word. For example:

(4) You can`t add an object directly after the separable word. Instead, the object can be introduced in the sentence by preposition or pronoun. For example:

c． 你好像生她的气了。(Nǐ hǎoxiàng shēng tā de qì le.)
It seems that you are angry with her.

Of course, the general verbs are not restricted by this rule. Any object can be added directly, if needed. For example:

Here is a list of some common separable words and common general verbs for your study. 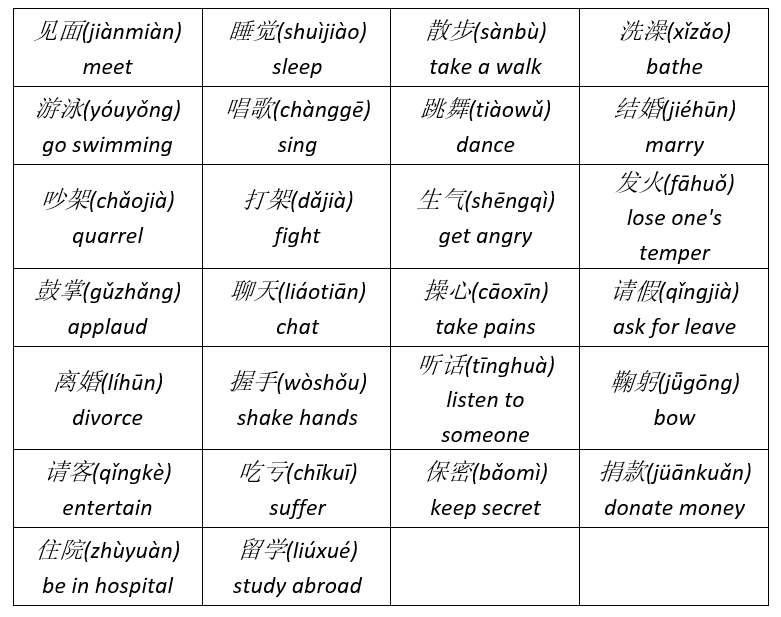 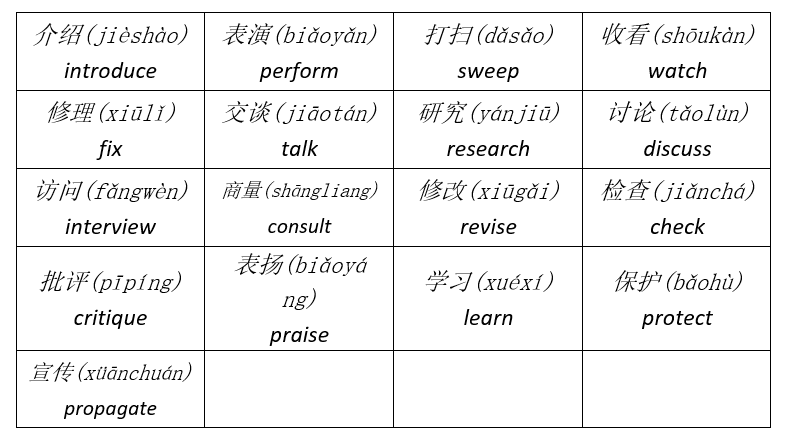 In this article, we have learned the conception and usage of 离合词(líhé cí). It is indeed a difficult part of Chinese grammar. You may feel a bit confused at first, but practice and study will lead to understanding and mastery of离合词(líhé cí). This is part of the journey toward speaking and understanding authentic Chinese, and to have better communication with native Chinese speakers.

Spring Zhang (张云梦) earned her Master' s Degree from Beijing Language and Culture University in 2016. A 7- year studying experience majoring in Teaching Chinese as an International Language provided her with a solid and professional foundation as a Chinese teacher. During her time as a student, she also had 4-year experience teaching overseas students in universities, which makes her understand her students' difficulties better. She now lives in Singapore and she devotes herself to Chinese Language education.