Crispy, succulent Peking duck（北京烤鸭běi jīng kǎo yā）. Piquant hot and sour soup（酸辣汤suān là tāng）. Orange chicken with a hint of citrusy zest （陈皮鸡chén pí jī）. Chinese cuisine appeals to palates the world over, but of its most famous culinary exports, there is one that remains an unrivaled favorite: The humble dumpling.

Dumplings, or jiǎozi (饺子), are as ubiquitous in China as fireworks or the color red. Served everywhere from mom-and-pop shops to the take-away counters at Chinese Wal-Marts, dumplings are essentially a staple food. But where did they come from? Why are they so popular? And what do they have to do with Spring Festival (taking place now)? 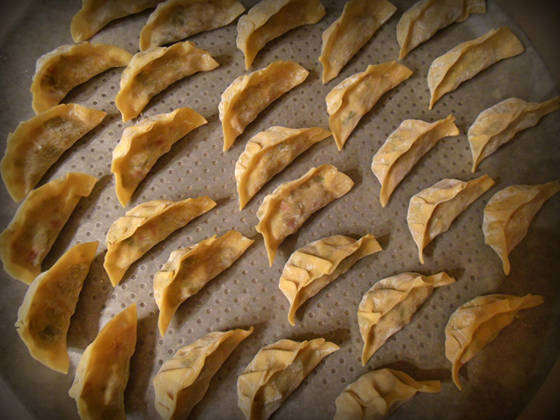 Legend has it that the origin of dumplings in China occurred in 225 A.D. – either to feed a starving, impoverished Chinese village or to replace disembodied heads (!!!) in creating the “dam that won the war.” (Maybe both?!) But let’s rewind 2,600 years to the peak of Confucian thought, during the writing of the Record of Rights. Penned during the Zhou dynasty (1,056-256 B.C.E.), it makes mention of the first recorded jiaozi recipe: “Use two portions of rice and one portion meat; fold them together and then fry.” Historians can’t pinpoint where the recipe first arose, but most agree that it was of Chinese origin.

Fast-forwarding to present day China, it’s easy to see the appeal of these small, tasty and portable meat-sacks. (Small wonder the recipe has weathered almost three millennia!) Nutritious packets with crispy or gooey skins and sumptuous, spicy meats make dumplings the perfect lunch-on-the-go or mid-day snack. And despite the influx of popular Western foods into China (and vice-versa), the innumerable variety of dumplings available helps them remain a dietary staple.

During Chinese New Year especially, jiaozi play an important role. On the eve of the lunar new year – or Spring Festival (chūnjié, 春节) – families gather together to prepare dumpling fillings and intricately fold together flour-covered packets of rich, spiced meats, all the while catching up with one another. A family-wide activity, these dumplings will be consumed at midnight on the lunar new year or on the fifteenth day, called the Lantern Festival, while paper lamps are lit and sent skyward. Dumplings have come to signify gold ingots (or sycee) for prosperity in the coming year in northern China, but largely serve to bring family members together as they gather for the Year of the Horse.

(Of course, there’s always that one family member that ruins the holiday for everyone else. It’s important to keep count of your dumpling consumption!)

And what better way to enjoy the upcoming Lantern Festival (landing this year on Feb. 14) than making your own dumplings? You can use my go-to recipe below, or get creative and make up your own fillings; macaroni and cheese jiaozi call to the inner child in all of us, and spiced sweet apple dumplings make great bite-size desserts. (My rule of thumb: If it appears in Latin, American, or Indian cuisine, it will probably be delicious in a dumpling!) 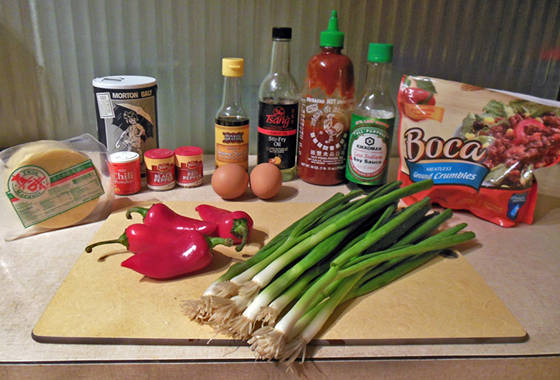 1. Thoroughly wash the 2-4 peppers and one dozen green onion stems. Un-seed the peppers and remove roots on the onions (the “tentacles” on the white part). Mince both vegetables into very small pieces and cook in wok or frying pan with a bit of stir-fry or vegetable oil and sesame oil, if preferred. 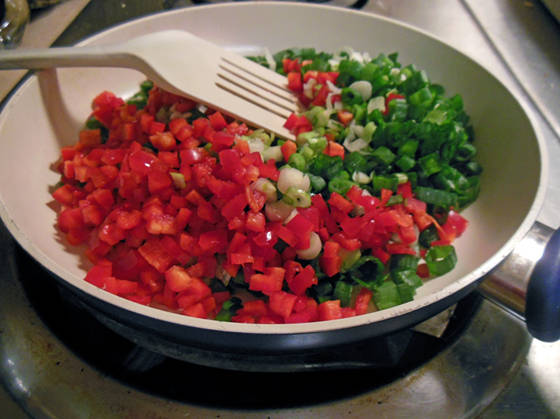 2. Next, scramble 2-4 eggs (depending on size) with salt, black pepper, and soy sauce (if preferred). Use your spatula to slice the eggs into small chunks. Then fry the meat or meat substitute of your choice with stir-fry oil and sesame oil (if preferred), spiced with the mild chili powder and crushed red chili flakes (for extra spice, if preferred).

3. Combine the minced vegetables, scrambled eggs, and meat or meatless crumbles, and mix together until evenly distributed. 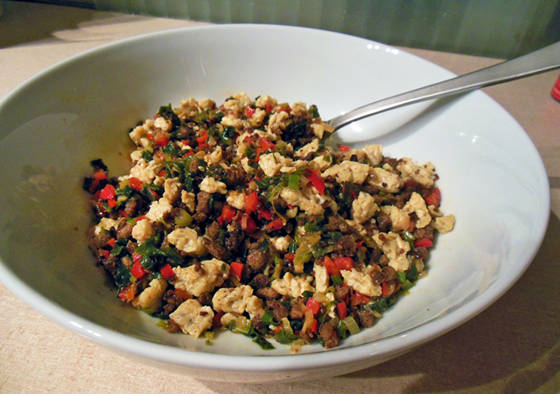 4. Set up your dumpling work station: With fillings in one bowl, fill another small bowl with lukewarm water, stack your round dumpling wrappers, and to the side, use a pizza or baking pan (covered with wax or parchment paper) to set the completed dumplings on. 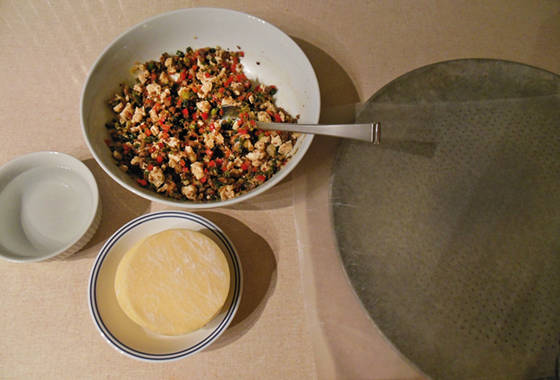 5. Placing one wrapper in the palm of your hand, dip the index finger of your dominant hand into the water and wet the outer edge of the top side of the wrapper (see below). Then scoop 1-2 teaspoons of filling into the middle, or enough to visibly take up half the wrapper’s surface area. 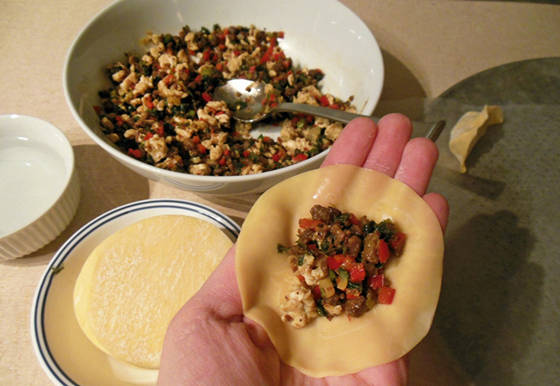 6. Using a 40-60 ratio, fold the dumpling wrapper over, keeping one side flat (the 40 percent side) and using the 60 percent side to create folds, all facing one direction. It sounds complicated, but there are examples here, here, and all over the Internet for making your jiaozi look more appealing. It is very important to ensure the edges are FULLY SEALED, to prevent the fillings from popping out. Practice, practice, practice!

7. Continue assembling jiaozi until you run out of filling, wrappers, or both. 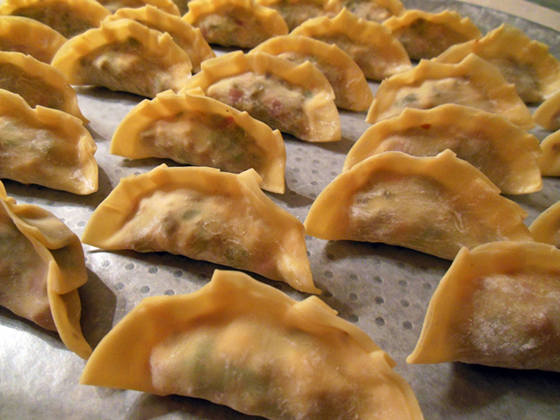 8. Congratulations! You’re nearing the finish line. With your tray full of dumplings in tow, you now have four options for cooking them: Steaming, baking, boiling, or frying. Steaming and boiling are the lower-calorie options; you will know the dumplings are fully cooked when the skins turn translucent and sticky, usually after 10-12 minutes of heat. To bake, which leaves you with a crispier skin, heat the oven to 350º and let dumplings cook on a non-stick sprayed pan for about 15 minutes, or until crispy. To fry – always the tastiest method – cover the bottom of a frying pan or wok with stir-fry or vegetable oil and cook until sides are lightly browned (usually less than 2 minutes). 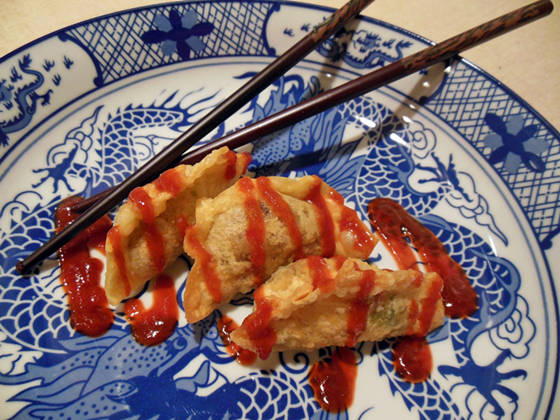 9. You can enjoy your authentic jiaozi with any number of dipping sauces (I love mine with Sriracha and soy sauce, but even sweet-and-sour sauce works.) Mmm, hǎo chī! Delicious! Happy eating. 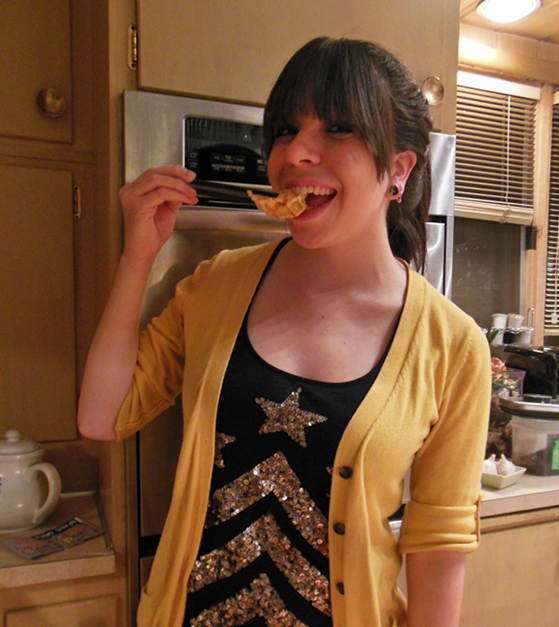