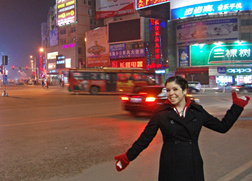 I remember it quite distinctly: Bus after city bus had been packed to sardine-can limits, and it was still too cold to comfortably walk the two miles back to my room in the school dormitories. I had been in China all of three months, teaching and writing about life in China for an American newspaper, and was one of three English speakers in the entirety of rural Yongzhou (population 5.6 million). But I took the plunge for the first time and hailed a cab, hoping for the best.

“四中学，谢谢（Sì zhōngxué, xièxie),” I answered, in shaky Chinese. I just wanted to get back to my warm dorm room at No. 4 Middle School and finally put down my armloads of groceries. I was “lǎoshī Kirsten,” American journalist-turned-English teacher in southern China, relentlessly scoping out the next big story on life in the Middle Kingdom.

(We’ll skip the embarrassing part where the cab driver tried to make conversation and realized I was an utterly incompetent American who could only shake her head and spit out “我不懂（Wǒ bù dǒng)” on repeat. If there’s one phrase that comes in handy, “I don’t understand” is a good one to commit to memory. But ¥6 yuán later I got home, and that’s what counts.)

As the months passed and I acclimated to my Chinese hometown, I grew more confident. Numbers were no longer a problem; haggling over vegetables or street food or a new shirt became a competitive sport instead of an impassable obstacle. I could suddenly read menu items, order jasmine tea, ask what time it was. My students – high school freshmen who loved to quiz me – were more than eager to help me improve my Chinese (and taunt me for my terrible pronunciation). Learning what the U.S. Department of State has called one of the “hardest languages to acquire for English speakers” suddenly became…fun!

Though I’m no longer teaching in Hunan province or publishing articles about life in modern-day China, I’m still working diligently on becoming fluent in Mandarin Chinese. And my guess is that you are, too. All it takes is one moment – that “taxi realization,” as I call mine – to show you that it is possible, and maybe even fun, to learn Chinese.

In addition to learning the language, I’ve teamed up with DigMandarin to bring you informational, educational, and entertaining articles on Chinese culture and society. Ever wondered why food from Húnán and Sìchuān (not “Szechuan”) provinces is so spicy? Why Nov. 11 is considered an informal holiday in China? How China’s social media websites work? The proper etiquette for eating out at a fancy Chinese restaurant? How Chinese folklore invented the modern-day zombie? I’m here to answer all these questions and many, many more.

I look forward to your questions – you can comment below- and to further exploring Chinese culture, language, and current issues with you. Whether or not you’ve traveled to China, I would also love to hear about your experiences with the language – they might even get shared on this blog!