Hello Mandarin learners! This month’s Book review shall be on Shao Lan’s much awaited book-Chineasy! This new book continues and expands the content on the famous Facebook page “Chineasy”. 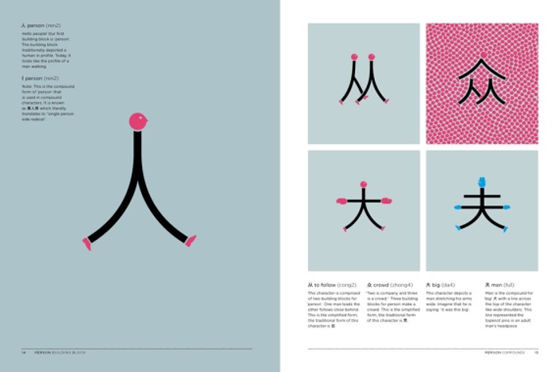 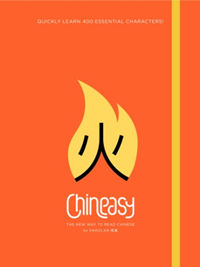 This is not the first time DigMandarin.com has mentioned the work of Shao Lan, however it is the first time we actually saw her work concretized in an comprehensive form of all of her images.

Shao Lan first begins explaining the logic behind her work by distinguishing the “building blocks”,” compounds” and “phrases” in her scheme and how do they work together to create meaning. In this organizational method, pictograph-type characters are the foundation for understanding the written Chinese language, the so- called ” building blocks”. Using these basic characters, many more complex and abstract words can be formed, either through : having two simple words joined together to form pictophonetic characters such as 吗 (which uses 口 and 马) , where one word gives meaning and the other gives sound, or by having two pictograph characters joined together to provide a whole new different meaning, such as in 休, which combines 木 and 人, since in ancient times, most people would rest under trees after working in the field all day long. So after this introduction, the book begins teaching all of the 150 basic characters and another 250 characters derived from the original 250.

To let it be clear, Chineasy is not the first pictographic system of teaching Chinese characters. It is quite common to introduce pictographic characters with their representations to novice Western learners in order to familiarize them with reading words in visual characters, instead of in the Western alphabetical form. However, Chineasy goes further and shows how these foundational pictographic characters make up more complex characters, a very important lesson that many Western learners internally learn and comprehend as they transition into more abstract and complex words.

Personally, for me, as a Mandarin student, this book was a helpful tool. Although I am an intermediate- advanced student, I still have learned some new words and characters. However, many of the pictures used to elucidate the characters seemed quite unnecessary such as in the 人 or 火 characters, since they are quite self- evident to most learners by their general shape. In fact, here in Brazil, students remember characters like these , even if in different memorization processes. In other times, this ” word-assembly process” can be quite unnecessary and quite consuming of time The characters that us Westerners need the most help are the one that have similar appearances such as 我，找 and 钱. All three of these words have completely different meanings (I, to look for, money) ,yet at first sight for Westerners, they may look the same, confusing the reader. This event, in which I suffered so much for a long time, is what I call a “pseudo-dyslexia” for Chinese, in where the reader cannot differentiate some characters from others or are switched around in the view of the reader, such as in 找，我,and 钱. So I think that there still should be a bigger focus to help in the interpretation and reading of these tricky words, rather than of the easier words that can be memorized without the help of diagrams, even if the former are more difficult to come up with diagrams for.

Nevertheless, this can be a useful tool to learn more words, or even for simple entertainment, due to the beautiful illustrations and stories in Chinese within the book that use the characters taught in it.

Indications of ways to use

However, it is most successful with children and visual learners

Eva Salustino is a Brazilian student who has been learning Mandarin Chinese for 1 year and a half. She enjoys reading about Chinese history and culture and hopes to someday travel to China. She would love to share her learning experience with all the learners and make more friends here.