“Until you can walk more than a few kilometers in any direction without running into a Starbucks, you’re not in the ‘real’ China,” my friend jokes as we take in the monolithic skyline of Shanghai’s Lujiazui on a recent summer night. If my friend is right, I’ve never seen the real China in my collective year and a half of being here. That news would surprise me and certainly set me on an existential tailspin as I question where I have been all this time, if not in China. Is Shanghai some 21st century Brigadoon (without all the singing and plaid)?

With mental images of rice paddies and millions of men who look just like Confucius, my friend, like many others I know, has a static view of a China that never really existed. To her, China is a homogenous society that stays locked in a hermetic chamber, sealed during a more glamourous time.

Before coming to Shanghai, I disparaged the city as too westernized, too cosmopolitan. The China in my mind did not include a place like Shanghai even though I knew that over 50% of China’s current population lives in urban areas much like it. My first exposure to China was Beijing, a hotbed of nationalism and requisite tourism. Ignoring the fact that the majority of sites in the capital were destroyed during the Cultural Revolution and later rebuilt, I felt that Beijing satisfied my preconceived notions of what China should be. The hutong alleys gave me Instagrammable moments of the old generation drying laundry on lines and cherubic babies with split pants squatting over sidewalks. The facades of buildings matched my mental image of multicolored pagoda architecture, and Wangfujing food street confirmed my idea that the Chinese are resourceful in their cuisine. If Shanghai had none of this, how could it be China?

The single-frame image that many foreigners have of China—as I once had as well—comes largely from an amalgamation of Han history and culture spread through literature and propaganda. Han, the dominant ethnic group at 92% of the current population, is named after the second major dynasty of a united China, lasting from 206BCE-220AD. While neither the longest lasting nor the most successful dynasty, the Han solidified power and influence over much of Central, Southeast, and Northeast Asia. Yet despite the persistence of their name, the Han weren’t the only people group to rule a feudalistic China. In fact, two of the most successful dynasties in terms of area conquered—the Yuan and Qing—were both “foreign” dynasties (the Yuan being Mongol and the Qing being Manchu). Even disregarding these two major time periods in China’s history, the country has never been the uniform state many like to think it was. Just take a look at this GIF of China’s borders throughout history:

With China’s 56 ethnic minorities and its long history of outside influencers, what makes romanticized Han culture so fundamental to China’s internal and global image? Largely, a rewriting of history. Despite reliable historical records from the time, much of the public’s image of the mythologized Han Dynasty comes from an historic-fictional tale called Romance of the Three Kingdoms (三国演义) written some 12 centuries after the fact. The book is one of Four Great Classical Novels, a canon that idolizes a Han people triumphant in the face of barbarism and outside influence.

Literature has no doubt played a significant role in shaping public image of what China was and should be. If you don’t take stock in the significance of history and the way it is told in art, just take a ride on any metro in any city in China and you’ll see person after person watching Han period dramas on her phone. But perhaps even more significant than literary propaganda in perpetuating the idea of a homogenous China is the very modern conception of “nation.” China may have been unified over 2000 years ago, but it didn’t become a country as we know it until 1949 (or 1911 depending on whom you ask).

That’s right: before 1949, China was little more than a diverse collection of dynasties and tribes occupying the general area we know as the China of today. In order for the new, Communist regime to rally support, it had to rewrite and re-conceptualize its own history along a linear timeline. It had to convince the people to adopt one time zone, one language. Mao Zedong codified the Han Man’s Burden into law. The history of the nation would be that of the Han people, the Han culture. The language that would be adopted would literally translate as “the language of the Han people (汉语).”

Of course, not even forced homogenization created a singular, “real” China. The infographic below (courtesy of That’s Mag) of the current languages spoken in China demonstrates just how diverse China still is: 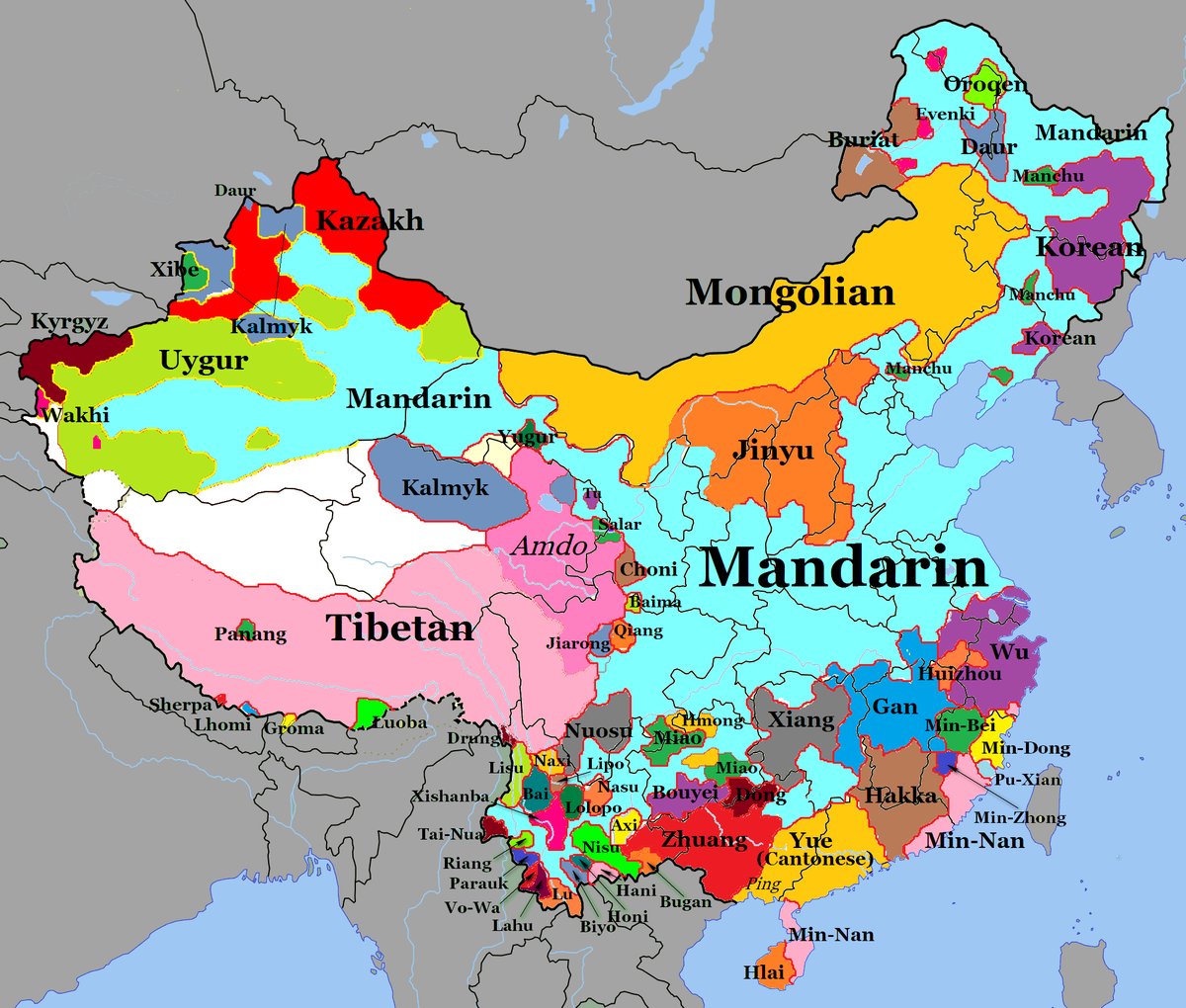 Nineteen forty-nine ushered in a new China, one obsessed with modernization, unification, and catching up with the West. As such, Shanghai is the perfect representation of the new China. No matter where you are in the city, you can’t walk five minutes without running into an extravagant shopping mall—and yes, a Starbucks too. Perhaps the city doesn’t have the rice paddies of your imagination, but it is as much China as Zhangjiajie or rural Sichuan. If the real China is a product of well thought out unification propaganda, Shanghai is as real as it gets. The city—the country’s largest—boasts a melting pot of a population. Walk down to the nearest bar street and you’ll see a woman from the mountains of Anhui chatting it up with man from South Korea, a little French baby being pushed in a stroller by his Hunanese ayi, and a jovial Shanghainese woman selling imported beers to a college student from Harbin. Shanghai is a well-oiled utopic machine: millions of diverse people and cultures coming together under one name. While that name is no longer Han but Capitalism, Shanghai is the unified city that leaders throughout China’s history have dreamed of.

I still haven’t found the real China. I wait in vain for a Schrödinger’s Cat that exists and does not exist, a Godot that will never arrive. And while I’m waiting, I think I’ll go get a Starbucks.

Rachel is a test prep teacher based in Shanghai. She has been learning Mandarin for nine years both in her native country of the United States and China. She is a former US Department of State Critical Language Scholarship program participant in Guangzhou. You can find her making jokes over at her blog, exploring how many foods she can eat on top of rice, and playing with dogs.