After making 14 trips to China and deciding to learn Mandarin, it occurred to me that there were certain Chinese phrases that could have saved me a lot of trouble had I known them during my first couple of visits. Here are two of them:

On the first morning of my first visit to Beijing in 2006, I was immediately presented with a plumbing problem: What did I need to do to operate the shower? I could see that there was a shower head high up in the wall over the tub, and there did seem to be some sort of handle or something in the tub itself that I tried turning this-a-way and that-a-way, all to no avail. What to do? I had already been told that the desk clerks at what was advertised as an “international” hotel on the PKU campus spoke little to no English, so calling the front desk was not an option. Then I heard the sound of muffled talking outside my hotel room and peeked out to see that one of the hotel maids was making her rounds. “你好!” (Nĭ hăo / Hello!) I waved at her. (Later, I learned that I could have called her 服务员(fúwùyuán)—the same term used for waiters in restaurants.) When she got to my door, I showed her in and then, through what I’m sure appeared to her to be a ridiculous pantomime, I acted out pointing to the handle, pointing to the shower head, using my hands to suggest water flowing down, and then shaking my head “No.” After watching a couple of rounds of this idiotic performance, my 服务员got the point, calmly walked over to the tub, and pulled out the handle (which I had been trying to turn). Water flowed. 谢谢! (Xìe Xie!): “Thank you!” I called after her as she left, no doubt to regale her fellow maids with an hilarious description of the crazy 外国人 (wàiguórén / foreigner) in room 602. 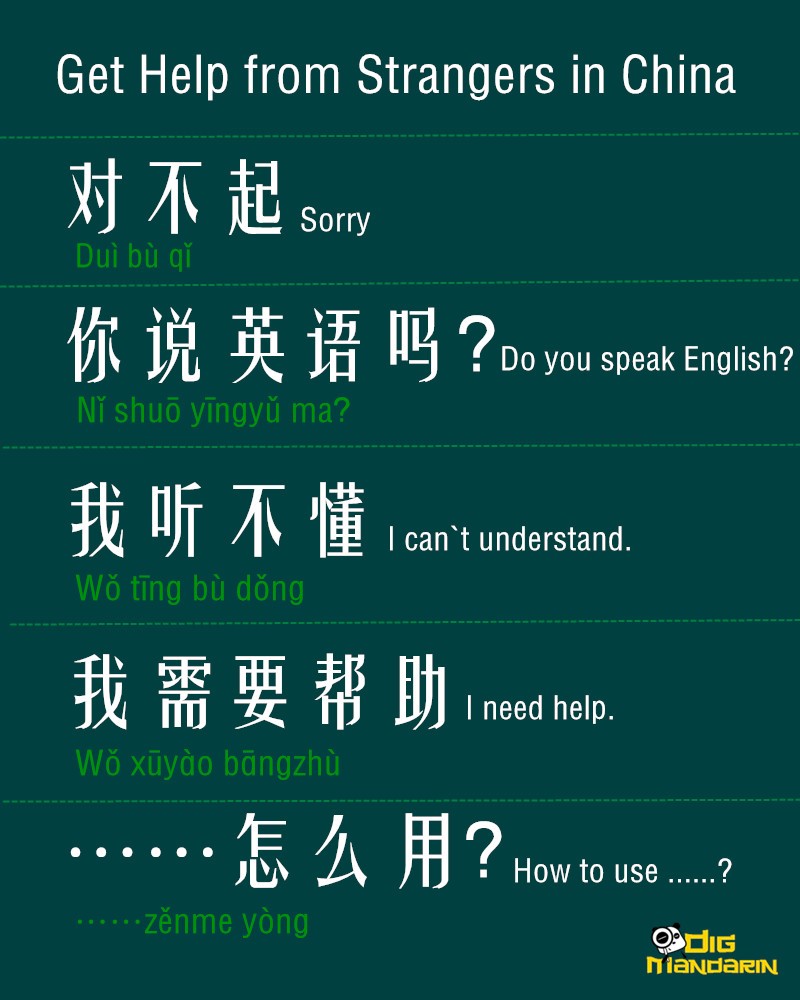 Some of the other nerve-wracking situations I faced during my early trips to China involved buying things, whether at the mini-mart next to my hotel or at any of the various small outdoor shops on the PKU campus. Since I didn’t know how to ask what something actually cost (多少钱？Duō shăo qián?), I would just give the vendor a ridiculously large bill and get back whatever change they offered. (I frequently bought two bananas with a 100-yuan bill.) In actual retail stores, most often there would be an electronic display on the cash register that would tell me exactly what the total cost of my purchase was, and so I was able to pay with the exact change. But then one day the cash register display was out of order or something, and so once again I had no idea how much money to give the cashier for my diet cokes, Lay’s potato chips (green tea flavor!), bottled water, orange juice, and yogurt. The cashier looked at me and said slowly and carefully . . . something. Then she said . . . something . . . again. I started to panic. Suddenly a voice came from behind me, speaking in English: “She says your purchases come to 57 kuai.” Ah, a lovely young Chinese student had come to my aid. “谢谢!”

And then there was the problem on the bus.

Through a mutual acquaintance I had made a good friend in Beijing whose English name is Elizabeth (her Chinese name is 汪 晓芳, Wāng Xĭaofāng). Elizabeth and I had many wonderful adventures together (we even went to Shanghai and Xi’An!), many of which involved me meeting her someplace as she lived quite far from the university. I would always insist on taking a cab to meet her because 1. Cabs in China are amazingly cheap, compared to those in big cities in the US; and 2. I could just hand the cab driver a note with the directions to the meeting place in Chinese (which Elizabeth would have emailed me earlier). But Elizabeth, a true Beijinger, was horrified that I was spending so much money on cabs when buses were so much cheaper, and one day she convinced me to take a bus from PKU and meet her at an agreed-upon spot for an outing. “OK, I’ll try it,” I told her, “but you must send me the name of the street/bus stop where I’m supposed to get off so I can show it to the bus conductor. And please tell me what is the exact fare for the bus ride?”

So on a bright sunny Sunday, I hopped on the No. 22 bus, which was crowded, but (being Sunday) not as jam-packed as buses usually are during the week. I found the conductor, a very official-looking woman, and showed her my directions from Elizabeth. (I smiled to myself as I imagined that the Chinese writing on my paper might actually say, “Please help this pitiful old foreign woman get off the bus at Mu Xi Di subway station.”) The conductor read my paper and nodded at me. Then she said . . . something. I realized that she was asking for the fare, so I quickly handed her my two yuan. She shook her head “no” and again said  . . .  something. I began to panic.

Suddenly, once again I was saved by a lovely young Chinese woman. “She is telling you that the fare is 1 yuan, not 2.” Must be a Sunday rate, I think.  “谢谢!” I told my young savior as I handed the conductor 1 yuan. Then I felt a tug on my jacket and I turned to see that a lovely elderly Chinese woman was gesturing to me that I should take the seat next to her. I did so gladly, and for the next 30 minutes or so of the bus ride, I looked towards the conductor as we arrived at every stop, and every time she made me understand, nonverbally, “Not this one.” Finally, we came up to a stop at which the conductor nodded her head vigorously, “Yes!” and I looked out the window and there was Elizabeth waiting for me. Kindness had once again saved the day.

So if you are planning to visit China soon and your knowledge of Mandarin is either miniscule or nonexistent, here are two tips from me: