Chinese text is traditionally written from top to bottom in vertical columns, running from the right side of the page to the left side. However, modern Chinese mimics the Western layout of text written from top to bottom, running from the left side of the page to the right side. To allow for the writing to run horizontally, the stroke order of some Chinese characters are changed. Because of this, there are small differences between the characters used in the two layout styles. Both styles, however, were created in order to aid the fluidity, accuracy, and speed of composition. The stroke order’s basic rules are independent of format style.

Learning the stroke order rules for Chinese characters will minimize the time and effort you will have to spend looking up individual character stroke order diagrams. Here they are:

As an example, the character 二 (two), which has two strokes, is written with the top stroke first and then the lower stroke. This rule applies also to other characters with Above to Below structure, such as 李, the top component 木 is written before the lower component 子. Click the following characters to see more animated character examples: 字, 只, 全, 宝, 音, 兄, 香, etc.

Among the first characters usually learned is the number one 一. This character has one stroke, which is written from left to right. Again, this rule applies to all the characters with Left to Right structure such as 妈 (mother), the left component 女 (female), which is a radical, is written first and then the right component 马 (horse). You can view more examples: 语, 打, 请, 呢, 汉, 你, 课, etc.

7. Inside before bottom enclosing (先里头后封口)

If there is a bottom stroke, the bottom stroke is written last. For an example, for the character 因, the outside enclosing strokes are written first, followed by the inside component 大 and then the bottom horizontal stroke. The same pattern you can find in园,国,四,团, etc.

8. Center verticals before outside “wings”( 先中间后两边)

For the character 小, the center亅comes first before the two dots. Same rule applies to character办,永,水,乘,etc.

Vertical strokes that “cut” through a character are written after the horizontal strokes they cut through, as in来,申,中,半.

Left vertical strokes are written before enclosing strokes. In the following two examples, the leftmost vertical stroke (丨) is written first, followed by the uppermost and rightmost lines (┐) (which are written as one stroke): 田 and 日. This rule applies to most of the characters with Full Surround structure, such as口,目,国,困,田, 囚, etc.

For examples, in character京,六,市,门,闪,主,the dots are written before any other strokes.

12. Inside or upper-right dots last ( 点在右上或里边后写)

For examples, in character或,我,玉,犬,etc., the dots are written last. 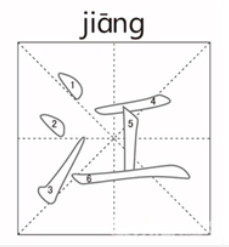 At times, it is not easy to determine whether you have used the correct stroke order to write a Chinese character. In this case, you should check it to make sure you have the stroke order right. If you don’t check it, then you risk starting a habit of writing a particular character using the wrong stroke order, which could be difficult to remedy after some time. When in doubt, look up the stroke order diagram for the individual characters, and then follow this order. This will aid you in writing Chinese characters in nice, smooth handwriting.

A book like this is excellent to help you improve your Chinese handwriting. It gives you the opportunity to practice writing Chinese characters using tracing paper; in fact, Chinese schoolchildren use these kinds of books for this very purpose. In addition to learning to write characters in a more neater, more precise manner, you can also increase your Chinese vocabulary from studying the characters that you see while practicing your writing.

How can you best utilize this learning tool? First of all, it is better to use a pen than a pencil when you write the characters. It is better to choose a thin pen (less than half a millimeter) if you only have gel pens; then you can use several weights to write the strokes. Secondly, it will help you to learn the strokes first, then the radicals, and finally the complete characters. This gives you a solid foundation so that when you are at the stage of writing complete characters, they will look much better.