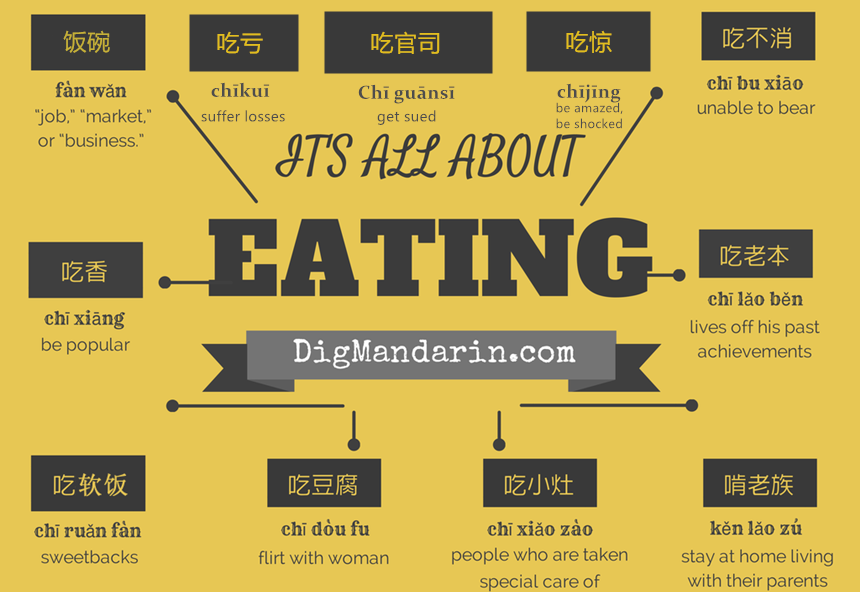 In China, people say that “民以食为天 (Bread is the staff of life.),” and that is true. Eating is such an important element of our lives that friends meet at restaurants, contracts are signed at the wine tables, and even working plans are carried out at dinner tables. It is all about eating. But today, we are going to see some words that seem relevant to eating, while actually they are not. 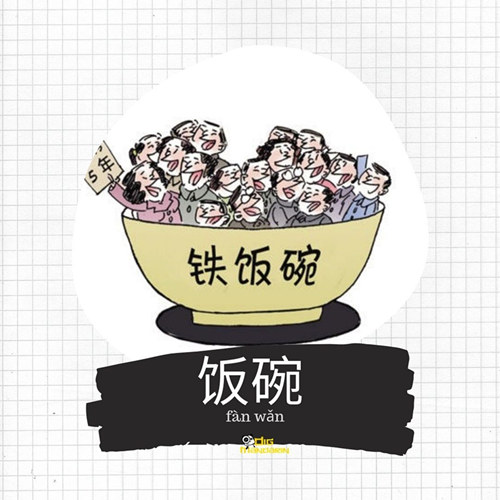 Similarly, the word “铁饭碗”， which literally means “iron rice bowl,” means a stable, lifelong job, or a permanent income they would never lose whether they work hard or not.

吃香 is an adjective. It has the same meaning as “受欢迎” (be popular). “香” means fragrance; it is something that makes people feel pleasant, so “吃香”(eating fragrance) must be a pleasing feeling. 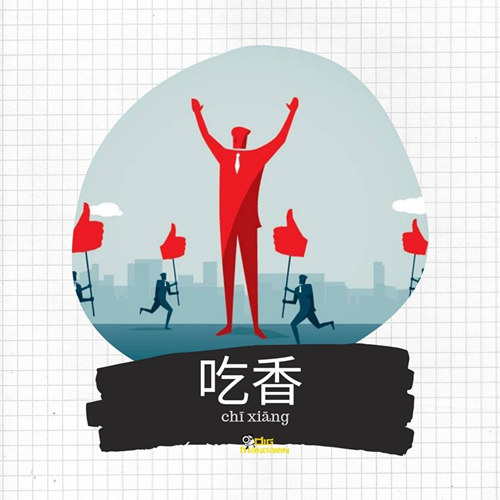 “吃软饭” is used to define men who are “sweetbacks,” who live off women rather than work for a living, or husbands who benefit through petticoat influence.

It is said that “吃软饭” comes from Shanghai dialect, and that in the old society of Shanghai, these kinds of men were sort of common to see. “吃软饭” was used to describe these men, and then eventually to describe a way of life they represented.

“吃豆腐” indicates the action when men take liberties with woman or flirt with them. But when this phrase was made, it was not about flirting but about taking advantages of others. Back in olden times, people went to a funeral to offer their condolence as well as to help, so the host would treat people with a meal, of which tofu was the main course. So people called this funeral meal “吃豆腐” or “吃豆腐饭”. There are people who didn’t help at all but were only interested in the meal, so people would say that these people just come to “吃豆腐”, that is, just to take advantage.
Since tofu is white and soft, people think it is quite like girls’ porcelain-like skin and tender character, so now “吃豆腐” is used with the meaning of a man flirting with a woman.

Literally, “吃小灶” means to eat by a small kitchen stove. In olden times, families were usually bigger; there may have been over 10 family members living in a big house, so housewives normally would cook with big stoves and big pots. Dishes cooked in big pots are less delicious than dishes cooked in small pots .Thus, people use “吃小灶” to describe those who are taken special care of, or those who are being paid special attention to, because in olden times, only people with a high social status were able to have dishes cooked in small pots.

The boomerang child is called “啃老族” in Chinese, which could be directly translated as “gnaw the old group.” There are also similar words, like “吃老族” (eat the old group) or “傍老族” (nestle on the old group). All of these words are used to describe those who are able to find a job, but take the initiative to give up their employment opportunities and stay at home living with their parents. They not only spend their parents’ money on basic living needs, but they also cost a lot of money on different things, even on luxuries. “啃老族” are in their 20s, and have the ability to make a living by working an ordinary job; most of them are college graduates. They often hold the attitude that it’s not fair that they need to work for a low salary while they are well educated, yet some of them can’t bear stressful jobs, wanting easy jobs with a good salary, hence, they are stuck in the state of unemployed and not looking for new jobs aggressively. Sociologists call them the “new unemployed community.”

“吃老本” is a figure of speech describing one who lives off one’s past achievements, or live on one’s own fat.
“吃老本” first appears on on January 9th, 1977. The Daily quoted Primary Zhou Enlai: “We need to educate cadres not to rest on our laurels, we must establish new feats.”

“吃不消” means to be unable to bear; it has a similar meaning to “受不了”. 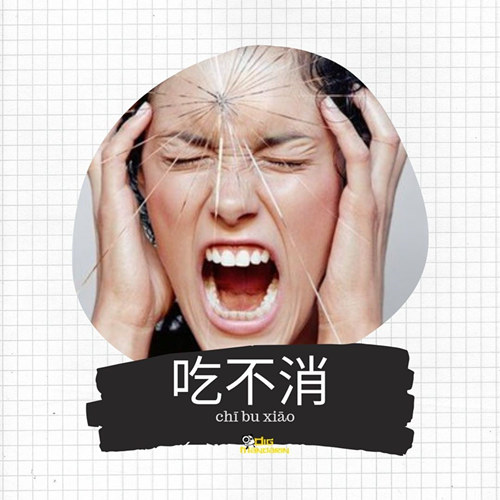 “吃不了兜着走” literally means “if you can’t eat up all the food, then you have to take away the leftover food.” This slang comes from dialect, but we don’t use its original meaning already, people use this sentence because it shows a warning and threatening tone, which can be translate into English as ”Watch out, if things go wrong ,you are going to bear all the consequences.”

吃亏 is used as a verb which means suffer losses or get the worst of it. The loss could be materially or mentally. 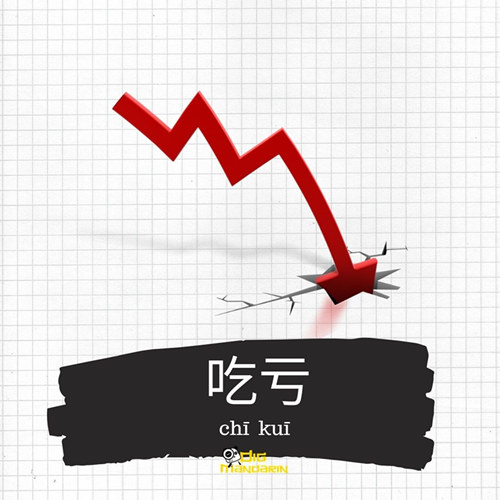 You will stand to lose if you do business with him.

She suffers the losses because of her face.

官司 means lawsuit. Literally, 吃官司 is “to eat the lawsuit”. This expression actually means to get sued or get in trouble with the law. 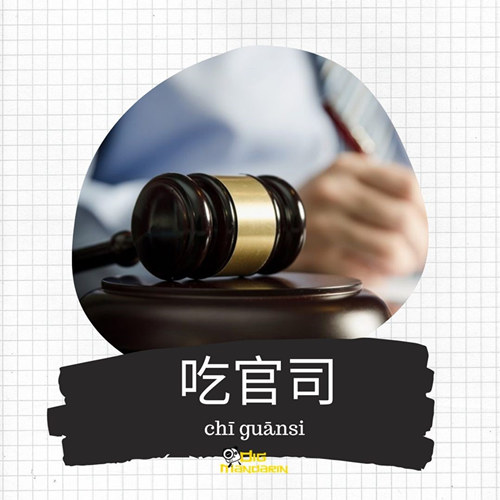 Recently it seems he got in trouble with law again.

Be careful. Don`t get sued!

We`ve learned some words about “惊”, such as 惊喜 (pleasant surprise)，惊讶 (shock). So here “吃惊” means be amazed, be startled or be shocked. 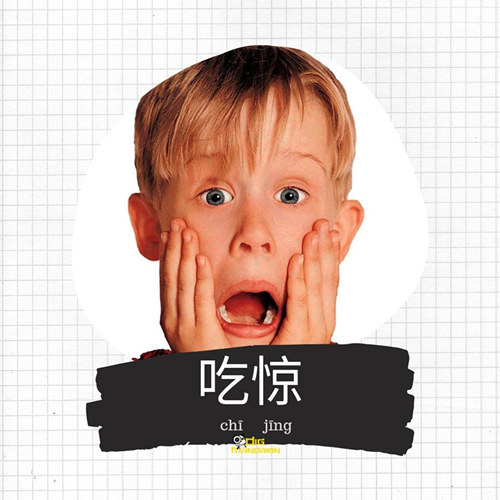 To my surprise, the door opened.

I`m surprised at the worry in his voice.

Lesley Xu has been working as a middle management and a Chinese teacher in an international school since 2008. She loves teaching Chinese to students from all over the world, and receives good reviews from her students. She feels very satisfied when Mandarin learners find out the culture behind the language.