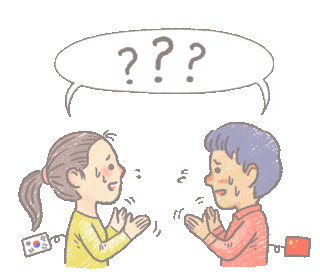 If you’re interested in learning the three languages of Chinese, Japanese, and Korean, Chinese characters are the key.

You can opt not to learn Chinese characters, or even delay doing so, while learning Japanese, Korean, or even Chinese (yes, you can learn conversational Chinese by using Pinyin/Zhuyin), but if you want to be a truly fluent speaker of these three languages, Chinese characters are the key. Once you have acquired the knowledge of a certain number of characters, it becomes easier to build up your Japanese/Korean vocabulary. With the Chinese characters you know, you can often guess the meaning of new combinations of characters that you encounter in your reading.

Written Japanese, or Kanji, is partially expressed using Chinese characters, while Korean is generally written in Hangeul (the Korean alphabet). In both languages, the changes were needed because Chinese characters were not designed for the conjugations that exist in Japanese and Korean.

Even if they are written in Kanji or Hanja, many “native vocabulary” can only be explained in Japanese/Korean context. Besides, many of the characters have, over time, taken on different meanings in Japanese and Korean. 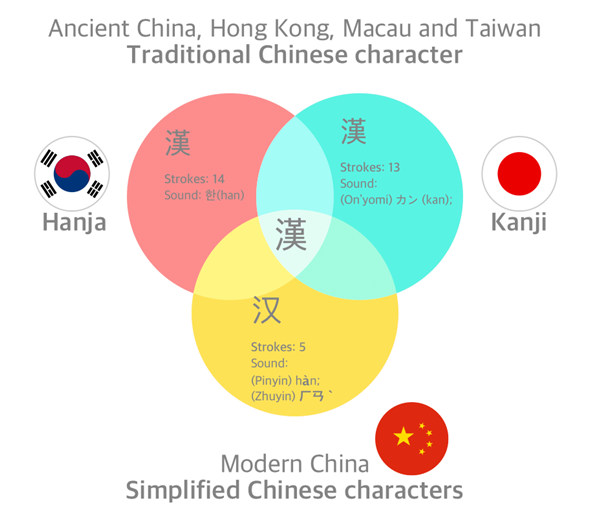 What is CJK’s writing system?

Chinese characters are not “built” by consonant and vowel parts. They are in fact compounds of a “pictorial” element. Hanyu Pinyin (developed in the 1950’s) and Zhuyin (developed in the 1910’s) are rather new inventions to “spell” the sound of the spoken language*1. It is not a system for spelling the shapes of characters. The simplified Chinese character “汉” (originated from 漢) is pronounced as “hàn” or “ㄏㄢˋ”.

Which language is the easiest from among Chinese, Japanese, and Korean?

Well, there is no absolute answer that applies to everybody. If your native language is English you will probably find…

… Japanese the easiest to pronounce.

… Korean the easiest to read.

… Mandarin Chinese the easiest to speak/converse.

But really, it all depends on the individual. Some would find one language easier to learn than the others. And that’s fine! What’s important is that once you set out to learn a language, you do your best, and eventually, you will get the hang of it.

In what sequence should we go about learning them? To what extent can learning one help us with the others

There’s no quick and fast rule but here is what I think.

1) You should let your passion be your guide. Whether you like K-pop, Japanese popular culture, or if you have a more practical reason, go with what interests you or what you feel you need to learn. Learning a new language is fun, even if it is time-consuming. Focus on one language at a time but don’t expect you will “automatically” understand or speak the other Asian languages right away.

2) If you want to learn at least two out of the three languages, and you’re not particular which ones to learn, you should definitely start with Chinese. Here are some notes on these languages:

（Click here to check Can the Chinese Actually Understand the Japanese and Korean languages?）

So, in summary, learning Chinese is the key to a better and quicker understanding of Japanese and Korean, as the two other languages can trace their origins to here. If you plan to learn all three, starting with Chinese is a good plan. Having said that, whichever of the three you choose to learn, you should put all your heart and mind into it, and for sure, you will reap the rewards of having done so.

Chris Lee worked as Mandarin Chinese language specialist at Eggbun Education (Chat to Learn Chinese App). She has been teaching Mandarin Chinese for 11 great years. If you learn Mandarin Chinese with her, you can speak fluent Mandarin in less than 6 months too, just like her other students. Contact: [email protected]