There is an abundance of wonderful Chinese learning blogs and articles on the Internet. Sometimes it is just impossible to filter through every single one. Don’t you wish you had someone to do it for you? Of course you do, and luckily for you, DigMandarin is always ready. Here is our selection for best articles in the month of December. 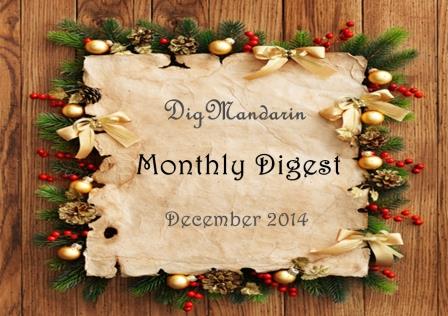 Christmas in China has been a growing presence throughout the years. In Beijing, the Christmas spirit is alive and well with all the Christmas decoration throughout the city. This holiday is celebrated in shopping world but it isn’t understood or known the history and traditions of Christmas.

Santa Claus (shèng dàn lǎo rén  圣诞老人) is widely used in the decorations in most places in China. Children are excited to see the Christmas spirit even with hard to believe stories like Santa coming down the chimney. However people in China love a reason to celebrate and it is good for business.

Christmas has sparked the curiosity of the Chinese people of what the story is behind the holiday. Since Christmas is translated as 圣诞节(shèng dàn jié) which means “holy birth festival”, many people have become curious about the story of Jesus (耶稣 yē sū) and not just the secular traditions of Christmas. Christmas is an important holiday for Christians (圣诞节对基督教徒来说是个重要节日 – shèng dàn jié duì jī dū jiào tú lái shuō shì gè zhòng yào jié rì) and even though it isn’t a national holiday, it is here to stay in China.

5 Tips to Help You Improve Your Chinese Writing Ability

This month’s challenge is about translations, which means that at least half the challenge is focused on writing Chinese. Here are some tips and suggestions for how to translate and/or write better content in Chinese and learn more from the process.

Tip #1: Never translate word for word, focus on the meaning

You should never translate to English directly to Chinese. It will result in unreadable or very awkward-sounding statement. You should split the translation into the next two steps that will follow in the next tip.

It is difficult to write in Chinese. Therefore, you should try to break down the process into two steps. First, make sure you translate the general meaning that you want. At this stage, how it flows in Chinese should not be the biggest focus. Then you should edit the Chinese text you have. This is where you edit to have it flow well in Chinese by with correct grammar.

Beginners can express much more than they think. Try to use what you know to express your message or meaning. It is about having the positive attitude about getting your message across even if you don’t know the exact words.

In Chinese, you need to be careful when you use a dictionary because you need to pay attention to: meaning (does the mean what you think it does in this context?); usage (how is the word commonly used in sentences?); and collocations (can the word you looked up be used with other words in your sentence?). If you don’t pay attention to these key points, it will create weird sentences and make it hard to comprehend what you are trying to write about.

Students think they can write better in Chinese by deliberating trying to use the difficult words, longer sentences and so on. It is best to use what you know and keep it simple. It preferable to read a simple written piece that makes senses than to read a jumble of difficult words that don’t work.

These are tips that I used for myself when I started writing in Chinese and what I tell my students. Take what you can from here and try out it in your own Chinese writing skills. Good luck and enjoy learning.

Some strokes that make Chinese characters are very important. Drawing them just bit too long or just with the wrong angle will change the meaning of the character completely. For example, take a look at these: 己/已/巳, 未/末, and 千/干. They are similar, but have subtle differences which can make learners confused. Learning to separate characters like these will require “horizontal vocabulary learning” which means you can’t just look at the character components or look at what characters and words a character appears in. You need to look similar characters at the same level, which will require focused studying understanding the subtle differences.

Remember to observe the small details of every character in order to tell the differences. It will help you distinguish the similar characters and help you in your Chinese study.

In a conversation with my friend about the challenges in learning Chinese, he mentioned that whenever he didn’t understand even part of something that was said, the whole conversation would shut down quickly. After some discussion, it became clear that he was using  听不懂 (tīng bù dǒng, “I don’t understand”) exclusively. This is a big problem because it doesn’t help in all situations.

For beginners it is a useful phrase to learn, however as you progress there should be a natural improvement in communicating your non-comprehension. By saying  听不懂 is essentially means, “I don’t understand anything you are saying”, which can be problematic if you are only struggling with part of what was said.

What? I didn’t hear clearly.
This is good because it immediately clues the listener into the fact that you may, in fact, know more Chinese than just a handful of phrases from a phrasebook. It also implies if you had heard clearly, you may have understood.

I didn’t understand what you mean.
This is not the same as 听不懂. Native speakers may use it when they understood every word, but the sentence doesn’t make sense to them or the speaker’s meaning is unclear. This will help you in similar situation.

Who are you talking about?
This one only makes sense if you’re reasonably sure the person is talking about somebody, but are unclear of who. It is can be problem if they weren’t talking about a person, but most things people talk about involves some person.

So you mean…
Sometimes guessing what the person saying is your best bet. It is a useful strategy because it is a focusing on the context. One of the advantages of guessing is that you’re kind of “showing your cards”. You are giving the person an idea of your vocabulary and listening comprehension level. It helps them modify what they said into a form you can understand.

There are a lot of other phrases you can use and probably all of them are better than  听不懂. You just have to put yourself out there a little.

Filler words are definitely worth learning for several reasons. The first reason is because you need them since you need extra time to think before you speak. Secondly, you can avoid sounding silly if you’ve been tempted to slip an “um” or “well” into a Chinese sentence. It also makes your Chinese sound more natural and fluent. Lastly, they are probably words that you already know in Chinese and it’s just learning to use them in a different way.

One of the most common filler word that Chinese people use all the time is nèi ge (那个), which means “that one”. You can place just about anywhere in a sentence similar to an “um” or “uh” in English. You can even string together several nèi ge in a row, which sounds funny but is not unusual to hear.

Another filler word that Chinese people use all the time is jiù shì (就是). This is also used almost anywhere in a sentence. Sometimes you might hear it used together with nèi ge.

People use the word rán hòu (然后) all the time. You probably know it means “and then” and is generally used to describe a sequence of events. People often use it as way to buy themselves some time to think about what to say next, similar to how we might say, “and, um…” in English.

The fillers mentioned above are easy enough to include in everyday conversations. Here is an simpler and easier filler word, ēn (嗯). It sounds like the English filler word “uh” but it hints an “n” in there.

Rather than creating an awkward silence as you think, try pulling out one these filler words to help you get some more time to find the right words. It will help you Chinese flow better and make you feel more natural in Chinese. Try it out and happy learning!

We hope you enjoyed our selection of useful blogs for the month of December. Keep up the learning and remember that DigMandarin is here to help you find all the resources you could possibly need.

He is 郭大贵 who grew up in Seattle and graduated from Seattle University with a Bachelors of Art in Business, majoring in Marketing and Finance. He currently is in Shantou, Guangdong teaching Oral English. 大贵 is a Chinese American who is able to speak Teo Chew dialect. He has been studying Chinese Mandarin for the past year. He personally enjoys being out traveling to new places and experiencing new cultural activities.