(AKA The time I broke my elbow in China)

No one wants to get sick or have an accident, but it happens – and as a foreigner in China it’s always good to be prepared. Below I’ve recounted my experience of breaking my elbow in China, plus some practical language and advice for visiting the hospital. I just hope you don’t need to draw on any of it!

In November 2010, I dislocated and broke my elbow in the middle of the Hangzhou mountain marathon.
Just a short way into the race, I tripped on a tree root and proceeded to tumble down a rocky trail. Initially, I didn’t realize my elbow was broken. I wasn’t in excruciating pain and somehow the joint popped back with a bit of pressure so my elbow could bend and extend normally. After collecting myself and taking some 芬必得 / fēn bìděi (a brand of Ibuprofen), I continued tentatively and completed the 26-mile run with my friend.
Only the next morning did the discomfort and immobility hit me. As soon as I was back in Shanghai, the hospital visits began…

Horrified that I hadn’t already seen a doctor in Hangzhou, my boyfriend took me directly to the international wing at 华山医院 / Huàshān Yīyuàn (Huashan Hospital). After registering and getting an x-ray, they sent me down to get a plaster cast (pictured below).

I’d never broken any bones before so I wasn’t sure what to expect, but treatment seemed pretty standard up to that point. Then, however, the doctor told me he was concerned about the severe nature of the break and that it might be best to do an MRI scan. I might even need an operation. 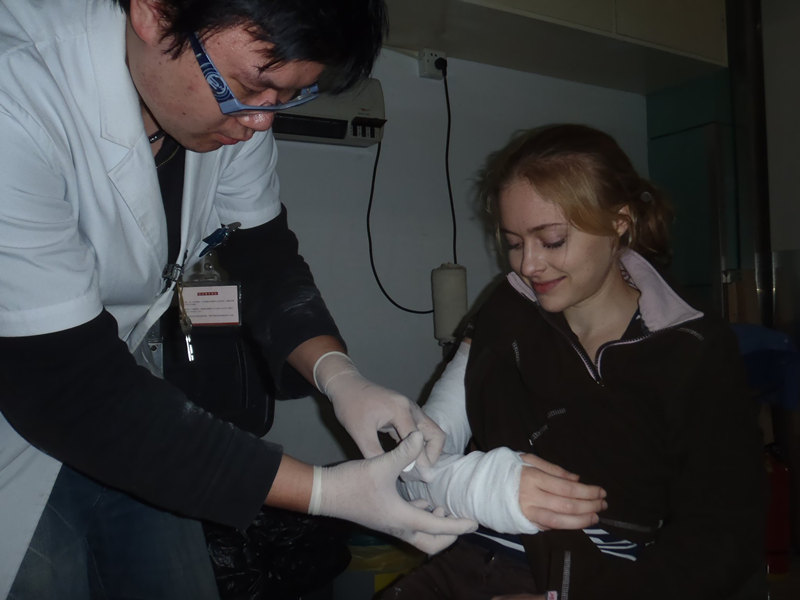 Back at work, my Chinese colleagues insisted I should get another opinion before doing any scans, and one very kindly went with me first thing the next morning to上海第九人民医院 / Shànghǎi dì jiǔ rénmín yīyuàn / Shanghai People’s #9 Hospital. It’s less “foreigner-friendly” in that there’s no English spoken and the facilities are more basic, but it specializes in broken bones. Once there, I had to register and wait among a restless crowd outside the doctors’ offices. Eventually we saw a doctor who had the kind of wizened lines on her face and matter-of-fact temperament to suggest she had had many years of experience working in public hospitals. She was great! After inspecting my x-rays she concluded that I should just keep the cast on for 6 weeks. All would be fine. I didn’t need an operation.

Having received that reassuring advice, I made a final stop at one of Shanghai’s international hospitals, Parkway Health, to get my plaster cast re-done, since the original one was not secure. The new cast was much better but then, exasperatingly, the doctor I saw at Parkway started talking about operations. I was so confused, and it was difficult to know who to trust. Did I need an operation or not?!

In the end I decided to just bring forward my Christmas trip home, where the UK’s public health service confirmed no operation was necessary. I had the cast removed after 4 weeks and started physiotherapy directly. It all turned out OK, and I was running again a month after. In total I spent between 5-6,000RMB, with all 3 visits, an X-ray, and 2 plaster casts. My insurance was very basic at that time, so I had to pay for it all out of pocket. However, it was quite reasonable considering (at least compared with medical costs in other countries, such as the USA).

I should mention that my tale is just one person’s and is not intended to be representative of all hospital experiences in China! Nonetheless, here are some conclusions I took away:

Sarah Souli é is British and lives in Los Angeles, after six years in Shanghai working in online marketing within EdTech. She has been learning Chinese since 2008, and currently contributes to the Speak Up Chinese blog. Speak Up Chinese is a newly-launched service based in Beijing. Their mission is to help you speak authentic Chinese with confidence, through 1-1 and group online lessons.