Personal pronouns are the most basic words in a language. They are essential for daily conversations, so of course it is important to learn how to write them. In Chinese language, the written forms of personal pronouns are surprisingly tricky. Unlike many other characters, they don’t have clear origin. 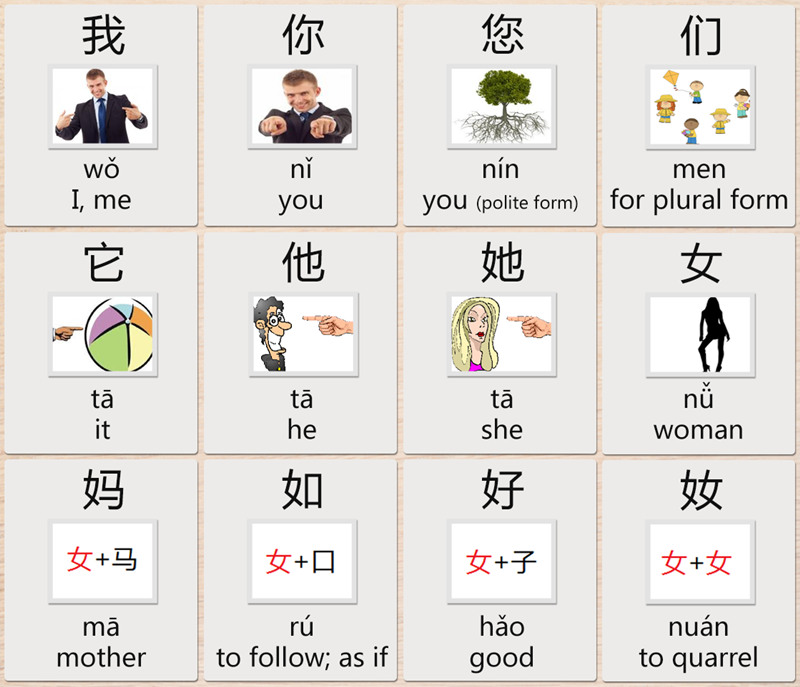 Here are some important facts to know about Chinese personal pronouns:

1. Chinese people use 您as a polite second form of 你(you).

2. 我, 你, 他, and 她 are singular personal pronouns. To make them plural, all you need to do is to add the们 suffix to a singular pronoun.

女(nǚ) – the Chinese character for “woman”

The written forms of “he”, “she” and “it” have much in common. However, “she” (她) can be clearly distinguished by the “woman” radical 女 that appears on the left of this character.

女 is thought to be in the shape of a woman who is going down on her knees with arms crossed her breast.

女 is used as a part of some other words:

As a radical, 女 may appear in any position, but it most commonly appears on the left side.

See what happens when the 女 radical is combined with some characters that we have already learnt!

女 + 女 = 奻 (nuán, quarreling or mutual slandering). When two women are together, they may begin quarreling.

As we see with女, the most interesting part of pronoun characters is perhaps how they are used within other words!

As personal pronouns are such basic characters they should be relatively easy to learn, given the frequency with which you will be seeing them. But keep an eye out for interesting ways they are used in other characters! Perhaps you have seen some already? If so, tell us about them in the comments below.