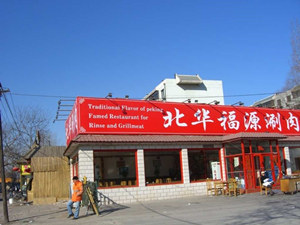 As I was watching Dig Mandarin’s wonderful video Ordering and Eating Hot Pot in China, I was reminded of my own experiences with this culinary delight in Beijing. I first became aware of this type of cuisine when I asked one of my Chinese students about a restaurant across from the 西门(xī mén, west gate) of the PKU campus called, mysteriously (to me), in English, “Famed Restaurant for Rinse and Grill Meat.” “That’s a 火锅 (huŏ guō, hot pot) restaurant,” she explained. Never having heard of this type of restaurant before, I was happy when some time later a Chinese friend invited me to dinner at one, where the concoction we assembled in a large wok in the middle of the table looked like this:

So all of this reminiscing made me think about how important a role food plays in one’s quest to understand a culture and its language. Indeed, the most common question I would get, after telling someone that I had just gotten back from China, was “How was the food?” I would tell them that 90% of what I had to eat in China was absolutely delicious—Peking Roast Duck (北京烤鸭, Běi jīng kǎo yā), Sweet and Sour Mandarin Fish (松鼠桂鱼sōngshǔ guì yú), any stir-fried vegetable (especially green beans or broccoli), and my favorite of all time, dumplings (饺子，jiăozi). The other 10% of the food I occasionally encountered was a little weird (fried scorpions on a stick, little white sautéed silk worms, a mélange of duck tongues, and a tureen of chicken soup with AN ENTIRE CHICKEN, FEET AND HEAD INCLUDED inside), but I could easily pass up any of those for the majority of really tasty Chinese dishes.

The problem was how to order such wonderful food if I was on my own in China. Left to my own devices and forced to eat out nearly every day (because my hotel room had no cooking facilities), I quickly figured out some useful ways to keep from starving (or avoid eating goose intestines). Here are three of them: