My last Digmandarin article “Tones Prefer Company!“ generated a lot of interest, prompting me to pen this follow-up. The idea that tones should not be studied in isolation, and the limited usefulness of the classic “mā má mǎ mà” example, resonated with a lot of readers.

It was also through my article that I found out about the great work being done by the folks over at SensibleChinese, who coincidentally published an article at about the same time, championing tone pairs as an essential tool for mastering Chinese pronunciation. They put together the very useful chart below, showing the 20 tone pairs in standard Mandarin, with a familiar example for each. The 20 comes from the fact that a 2-character word can begin with one of the four tones, and end in one of the four or the fifth neutral tone.

(For extra credit, note that 3-3 pairs are pronounced exactly the same as 2-3 pairs, so really there are only 19 unique Mandarin tone combinations – you can read more about why here.)

To review the concept – if a Chinese 2-character word begins with 1st tone and ends with 1st tone, we put it in the 1-1 tone pair bucket. All words in the 1-1 bucket have the same intonation, so if you know one well, you can apply that pronunciation to all other words in that bucket. It helps to pick one familiar word as the label for that bucket. So you may call 1-1 words the “today” bucket or the “airplane” bucket. Let’s give it a try.

Let’s try another, the 1-2 tone pair, you may call this the “forest” or “China” bucket. Here, there is a distinctive jump from the 1st tone down to the start of the rising 2nd tone.

We covered the 3-2 tone pair in the last article, but it’s worth revisiting. It is a beautiful phonetic pattern, with the 3rd and 2nd tones blending together in a smooth curve. Notice that the 3rd tone is not falling and rising, as often described – it is a deep, throaty sound.

Now let’s have a look & listen at tone pairs that include the 4th, falling tone.

You can check out app Trasee! for Chinese, packed with exercises to help you practice visual as well as phonetic patterns, and several word collections specifically built around the concept of tone pairs. 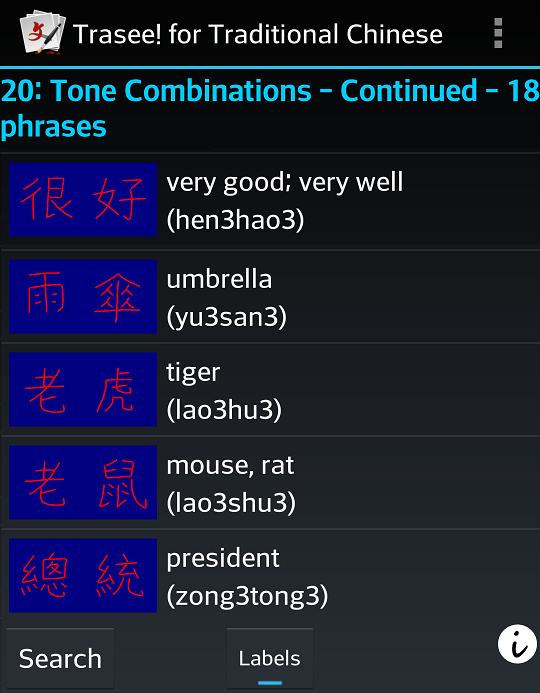 Here again is a useful word list for illustrating tone combinations. Use it in addition to the “mā má mǎ mà” example, to not only impress your friends, but give them a more realistic point of reference for understanding Chinese pronunciation.

And let’s close with another useful example, of two common words that sound alike except for the difference in tone pairs – also two of my favorite things after a long day of studying Mandarin:

Joe Varadi lived and studied in Shanghai and Taiwan, in a simpler time before blogs and smartphones got big. He is the creator of Trasee! for Chinese Trasee, a mobile app for Chinese reading and handwriting that incorporates many of the techniques he developed while learning Mandarin.