Although each Mandarin Chinese character correlates to one spoken syllable, you need to learn the pronunciation of each character because the written form generally doesn’t indicate the way it should be pronounced. Fortunately, there are only a few basic sounds (phonemes) to learn for each syllable. The pronunciations of these syllables are spelled out in the hànyǔ pīnyīn alphabet. This system is used within all schools in China as well as by Westerners learning Chinese. Pīnyīn is used for the majority of Chinese names and words that are included in books written in English. The pīnyīn alphabet is the same as the English alphabet except there is no “v,” and “ü” (u-umlaut) is added to it (at times, “v” is substituted for “ü”).

There are four different tones (shēng) that are used in Chinese syllables: high (1), rising (2), low (3), falling (4); in addition, there are some syllables that are toneless. Marks above the syllables (bā bá bǎ bà ba) or numbers (ba1 ba2 ba3 ba4 ba) can be used to show which tone is being used. Generally, the fifth tone in pīnyīn isn’t written;

Here are some excellent tools you can use online to assist you in mastering the pronunciation of Mandarin Chinese.

As mentioned earlier, there are four different tones used in Mandarin Chinese. Tones are used to distinguish words that have the same sound. They are similar to speaking with expression in English, except rather than conveying emotion, they convey a different meaning. Below is a chart of the different tones used(Clickable in “Pinyin” column).

Chinese Pinyin Chart will take you to a pinyin chart that is very helpful in figuring out which tones correspond to which sounds. Practice your PinYin with one click away.

Pinyin Convert Tool – you can use numbers to add tone marks to pinyin. For example, if you type “Xi1an1,” it will be converted to “Xī’ān.” This is helpful when you want to type in pinyin using tone marks. As the creator of the website says, “This Chinese numbers pinyin converter tool is the first and only tool for correctly adding tone marks to pinyin from within a web browser. All of the other tools of this type that I’ve seen require server requests, and thus make the user wait during page loads.” It’s certainly a good choice when you want to add tone marks without waiting.

#4: Chinese Character to Pinyin with Tones 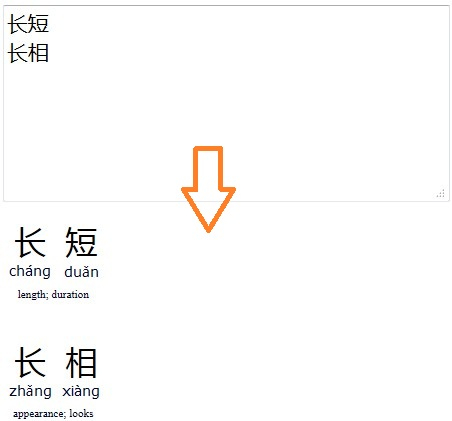 If you know of any other useful tools that help with learning to pronounce Mandarin Chinese, leave a message in the comment box.

Benjamin is a language and culture enthusiast. He has been learning Mandarin Chinese more than 6 years. He lived in Shanghai, HongKong and Singapore.