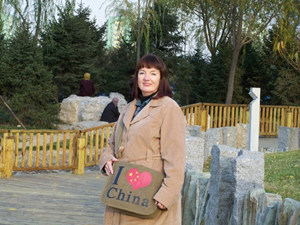 Good thing I enjoy it so much.

According to an article published on CCTV America in 2015: “There are Chinese programs in more than 550 elementary, junior high and senior high schools, a 100% increase in two years . . . and early figures suggest the number of students now studying Chinese has ‘got to be somewhere around 30,000 to 50,000.’” So I’m definitely not alone, but I’m pretty sure I’m one of the older students (having completed my own higher education nearly four decades ago).

I had never thought about going to China: I had no friends or relatives who had ever been there and all I knew about Chinese culture was what you could order at a Chinese restaurant in the US. (Fortune cookies! So traditionally Chinese!) My own heritage is distinctly European: All four of my grandparents emigrated from Ireland in the early 1900s. I had been to Ireland many times, as well as Germany, Italy, Scotland, and England. France, Spain, and Greece were still on my to-do wish list. China was not on the list.

And then, in 2006, I accepted a 6-week position as a visiting professor of Business Communications at Peking University in Beijing. My students all spoke English more or less fluently, but every day I could hear Chinese being spoken all around me and I began to wish I could understand what I was hearing. “你好” (nǐ hǎo), of course, I learned immediately. Also “谢谢” (xièxie, thank you), which is a nice thing to learn right off in any country. Soon I had learned how to call the waitress (“服务员” fúwùyuán) and how to order my newly discovered favorite Chinese food: “饺子” jiǎozi, delectable dumplings).

Fast forward to 2013, and I have now traveled to China 14 times, teaching in Beijing and visiting Xi’An and Shanghai, and the only Chinese phrase I have added to my repertoire is “不要” (bù yào), Don’t want! (which is a useful phrase if one is bartering at the Silk Market in Beijing or fending off aggressive vendors outside the home of the Terracotta Warriors). This is ridiculous, I conclude. I have too much invested in China now. I must learn more about this country’s unique culture by learning its language. What a surprise—in Albuquerque, New Mexico, I find a Chinese teacher who is originally from Suzhou (I’ve been to Suzhou) and Taiwan. Nearly three years later, I have still not reached my goal of someday being able to speak Chinese at the level of a two-year-old child, but I’m getting close. I recognize many characters right away, and can even construct simple sentences and basic questions. The tones are still a major headache, but I am determined to prevail.

I believe that three key practices have helped me immensely on my journey to learn Chinese and have kept me moving forward, one step at a time, without discouragement:

I found a great teacher (很好老师), one who is not only interested in teaching me Chinese but is also interested in me. During our twice-monthly hour-long sessions, we not only review and correct my homework—we also chat (in Chinese!) about our daily lives. This interaction allows me to practice what I am learning and so I learn faster.

I use a very good Chinese language text book: Practical Audio-Visual Chinese, volumes 1 and 2, 2nd edition. This text includes dialogues on different topics (that I can both read and listen to with the accompanying CD) and extensive exercises; most importantly, its structure is recursive, which means that the content of the exercises constantly circles back to vocabulary and grammar from earlier chapters, thus ensuring that I don’t forget things I may have learned a while ago.

I try to immerse myself in Chinese culture as much as possible by watching Chinese movies that I get from Netflix (I will watch any movie directed by 张艺谋, Zhang Yimou) and Chinese TV shows on YouTube. (Children’s programs in Chinese are particularly helpful for a student at my level.)

If you want to follow my practices for learning Chinese, you can start with Dig Mandarin, where you will find many resources for teachers (online and onground), textbooks, informative articles, and videos.

Now I must go. My Chinese lesson is two days away and I have homework to do. 我可以做这个! (Wǒ kěyǐ zuò zhège!) I can do this!