Most apps I have used focus strongly on speaking and listening while dedicating little time to reading and writing. However, especially for Mandarin Chinese, reading and writing can be a real pain and up to now I haven’t found any good solution. Enter Zizzle: Zizzle is a Mandarin-learning app whose main purpose is teaching how to recognize and remember Chinese characters, including their shape, meaning pronunciation and tone; and for this task, it does a fantastic job. 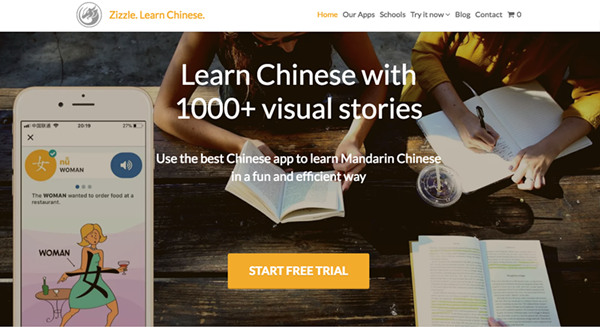 Zizzle (available for both iOS and Android) teaches Chinese characters not only through the traditional way of repetition. Rather, Zizzle makes you remember characters through association, and it does so via visualization and keywords. When Zizzle teaches a character, it introduces it with a two-part story that contains links to the character’s shape, meaning, pronunciation and tone. The stories are accompanied by images which will help create an additional visual layer of learning. As we will see in this review, some of the stories are absolutely hilarious which actually helps the learning effect. Through this method, Zizzle makes it possible for you to remember the characters in a much more interesting and faster way. 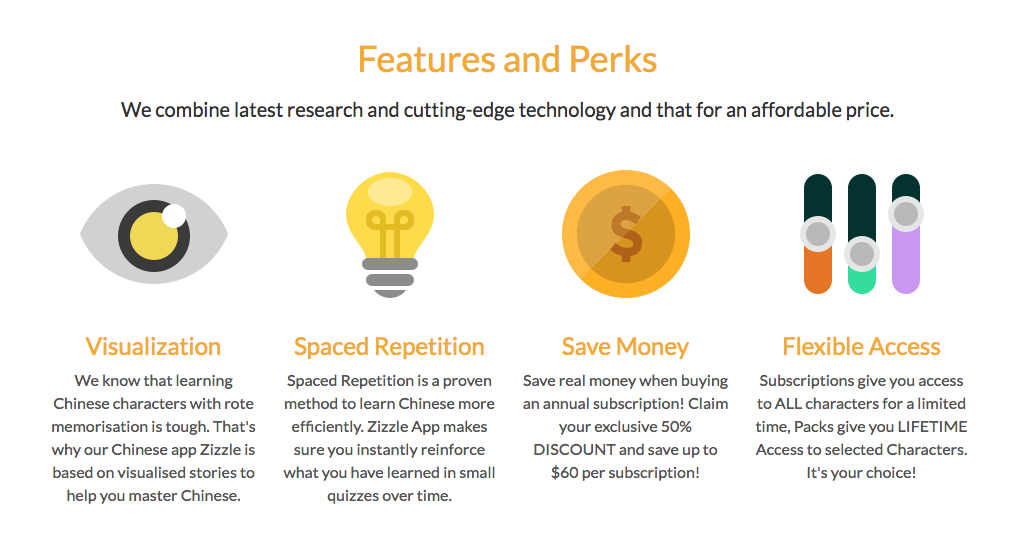 Try a free trial to Zizzle

Use the promo code “DIGMANDARIN10” to save 10% on all three-month and annual subscriptions, as well as packs.

The app is easy to download (I used the iOS version) and has a very simple and easy-to-use interface. It did not take me long at all to get used to how the app works. The number of buttons to press is minimal. Keeping the app simple and easy to understand is important for learners. 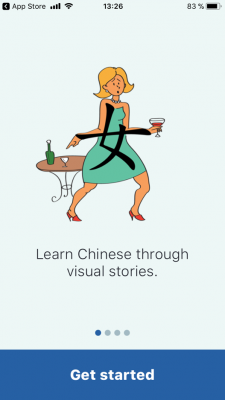 The app starts out with a tutorial to get you started which takes you through the workings of the app. It’s very intuitive and it won’t be long before you start to learn Chinese characters through the Zizzle “library”, starting with Lesson 1. 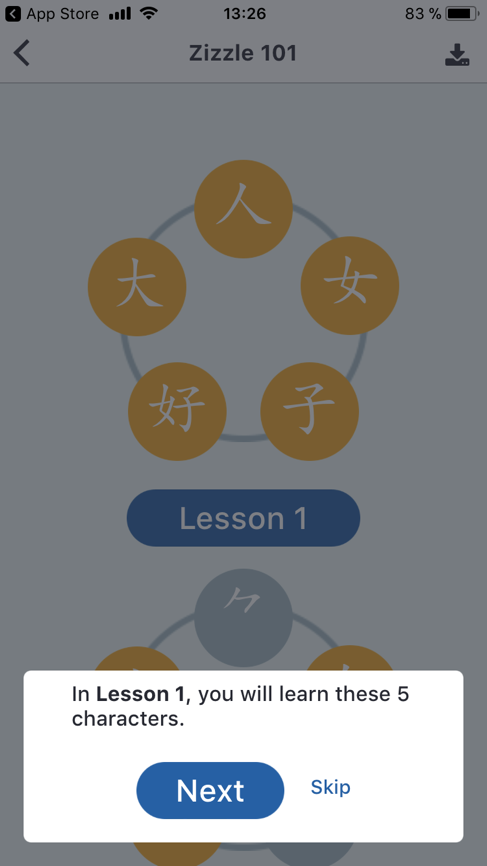 Each Lesson is composed of five characters, and you will learn each character in turn. At the end, you will have learned what the character looks like and how to pronounce it via associations in the visual stories, its usage in Chinese sentences that have English translations, and even downloadable audio.

As an example of how Zizzle works, here are some sequential screencaps of how Zizzle teaches its users to learn the character 大 (dà), meaning “big”. 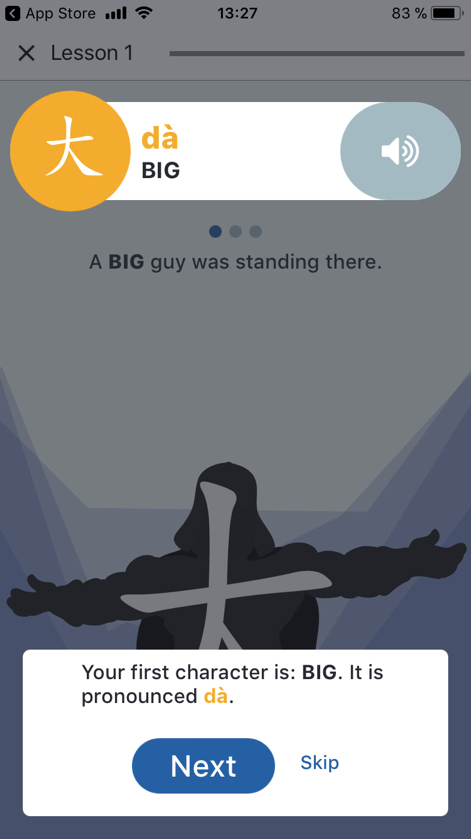 Zizzle starts by showing you the character, its pinyin, and its definition with a choice to hear the audio of its pronunciation. If you already know a character, you have the option to skip learning it before you start the lesson. 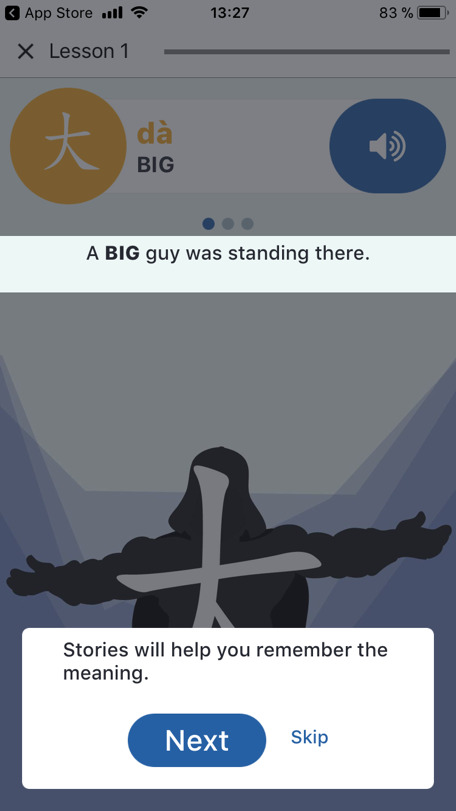 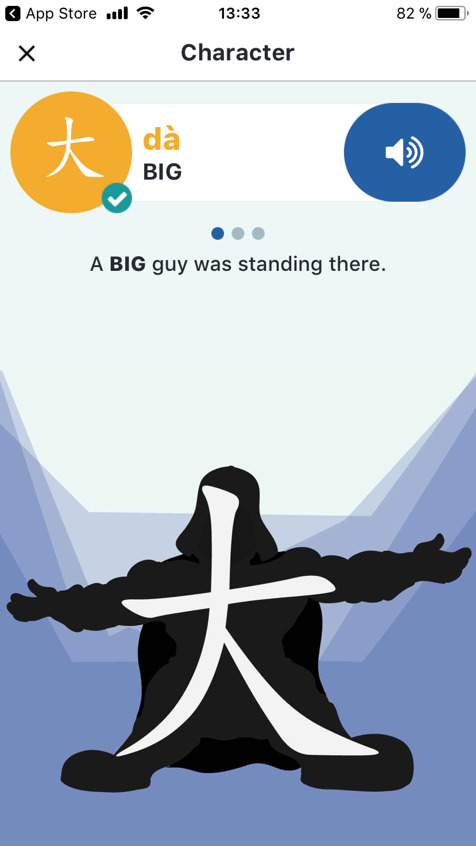 Swiping right leads you to the continuation (the second part) of the story. 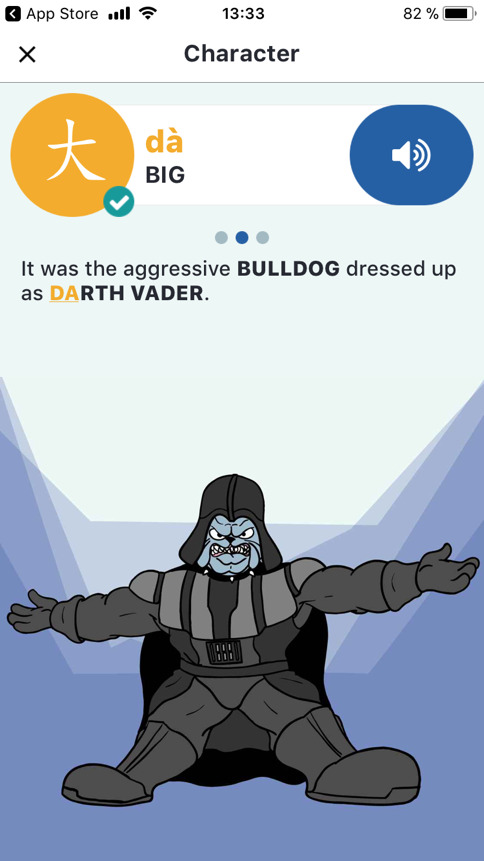 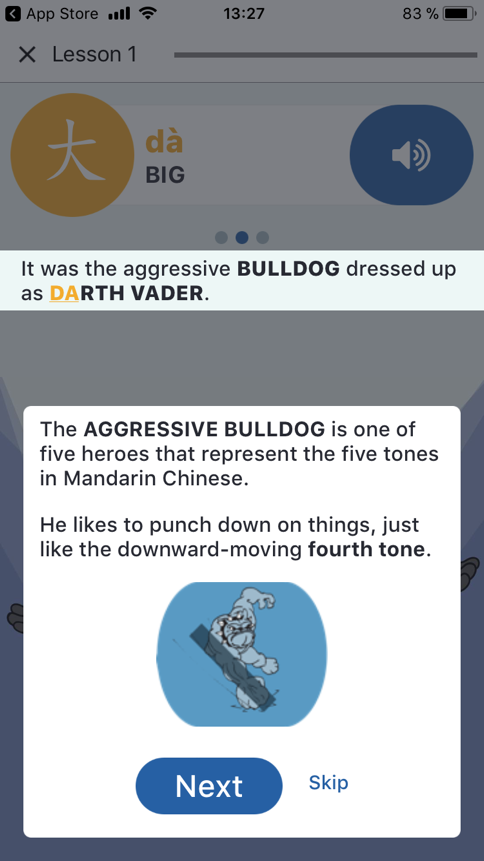 Finally, the Zizzle story introduces a “hero”, which helps you to remember the tones for the word’s proper pronunciation. In our case, the hero is the bulldog, who represents the fourth tone, because he likes to punch down on things, just like the downward-moving fourth tone. 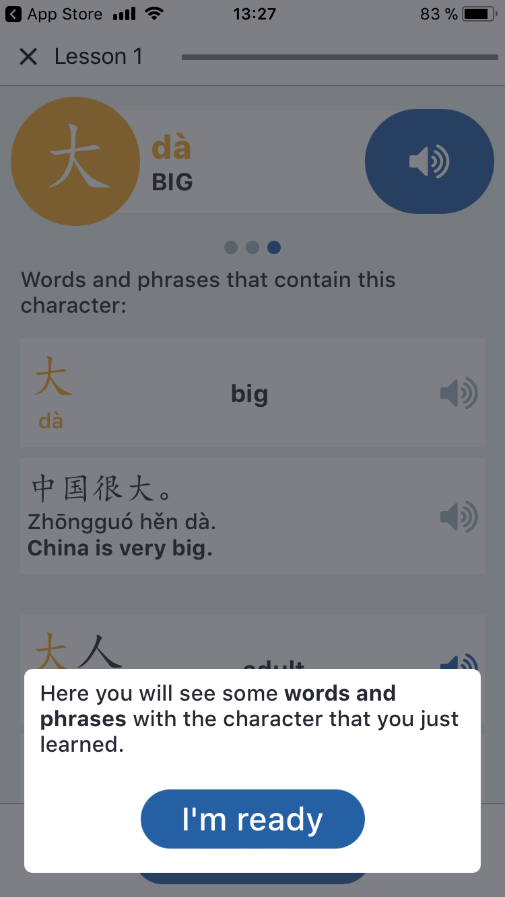 After introducing the two-part story, the lesson continues by showing you words and sentences with the character in actual use. Here, you can find examples of the word being used in a sentence, with an option to hear the audio. You can then start the quiz to test your knowledge.

If you get all your answers correct, you pass the quiz, and you have just learned a new character! 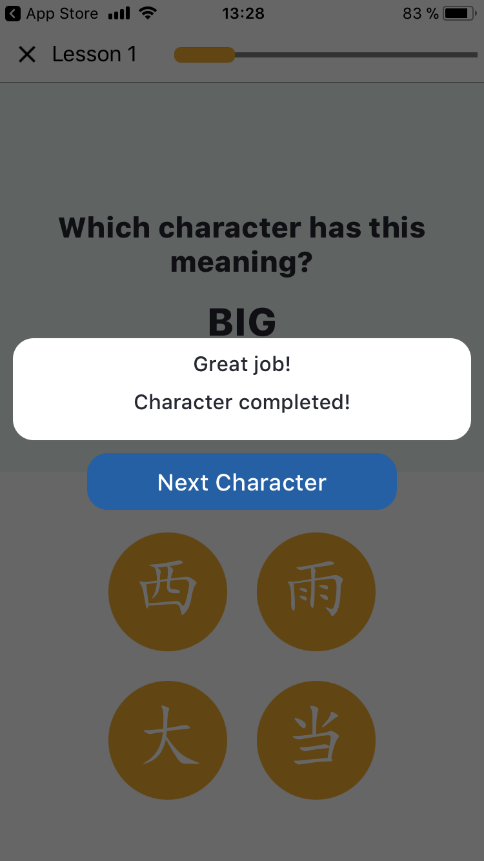 For 大, they used an image of a BIG fictional person, Darth Vader. The image and the DA in Darth Vader’s name help the learner to remember the shape of the character as well as its meaning and pronunciation. Zizzle then uses a hero to teach the tones, with each character representing a tone. In the above example, the bulldog represents the fourth tone. They also have a turtle, a fox, and a dragon, to represent the other tones (1st, 2nd, and 3rd), as well as another hero that looks like a bamboo stick for the “light” tone.

Together, these parts form the stories that Zizzle uses to help learners remember the character better than through rote memorization. After this the app will present the character in a sentence or two to show how it is used in context.

Finally, users can take a short quiz to test you on what you have learned. The quiz will ask you to answer multiple choice questions regarding the character’s tone, look, meaning, and pronunciation. This quiz is the final part of the process in learning a new character.

The majority of Chinese characters usually have more than one component, so of course I was wondering how Zizzle would take on these. After all, complex characters are not as easy to visualize. However, with regard to complex characters, Zizzle makes great use of the natural building structure of Chinese characters. In particular, they often consist of parts called radicals which, when combined with other parts, form new characters with distinct meaning and pronunciation. Below is an example with the character 谢 (xìe) to show you how that works in practice:

谢 means “thanks” which you might know from the very common expressions 谢谢. Zizzle breaks the character down into its parts, in our case the word radical, and the character 射 (shè) which means to shoot. You can clearly see, how, when the two parts are put together, they form the character for 谢. 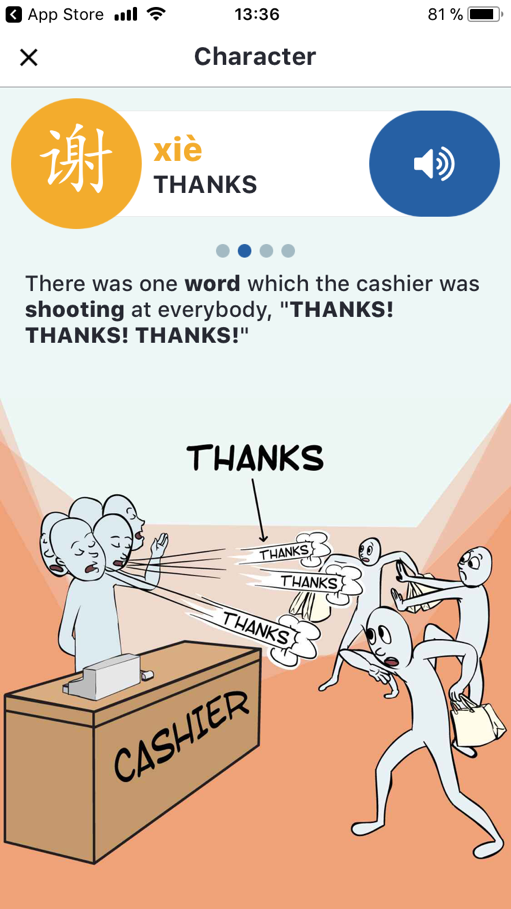 Zizzle will then turn this relationship (word + to shoot = thanks) into a story, again accompanied by an image, so that you will have a visual memory of it. This makes it easier for you to remember the components of complex characters as well as the meaning of that character itself. What I particularly enjoyed about Zizzle is the fact that the stories sometimes are a bit funny and absurd which really contributes to its memorability. 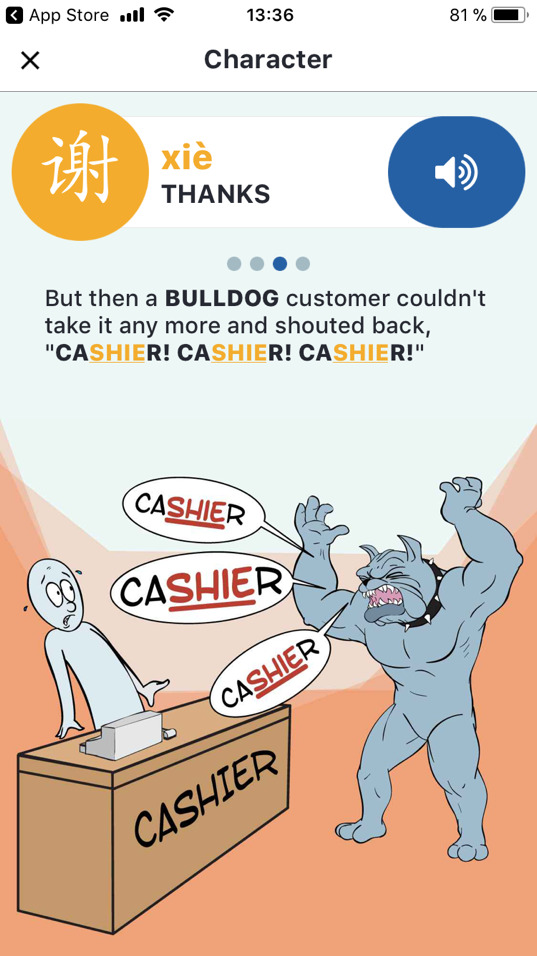 Following Zizzle’s style, it continues the story in its second part by giving you a linkword (CASHIER) and a hero (the bulldog) to help you recall its pronunciation and tone. And yes, the second part of the story is still pretty funny and absurd. But I’m sure you will now easily remember this character! 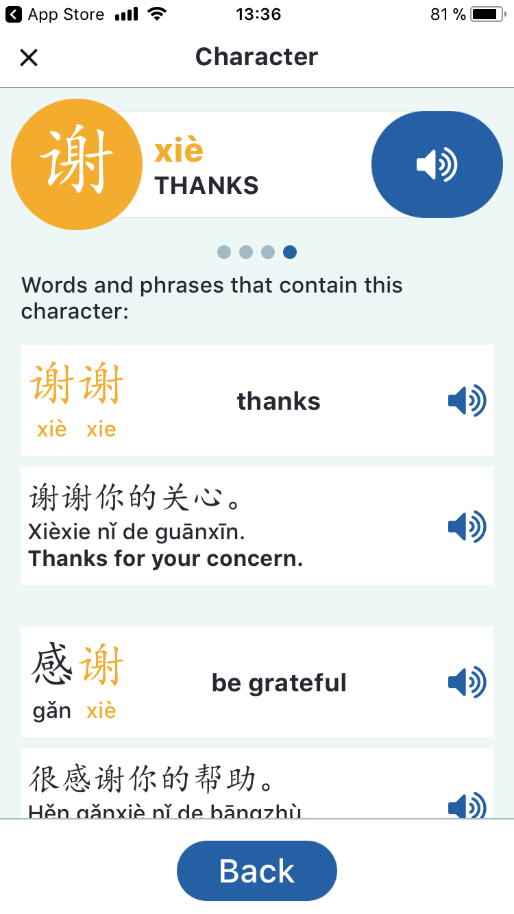 Overall, this is the sequence that Zizzle follows to help you increase your Mandarin vocabulary. In addition to the basic character learning function, Zizzle offers spaced repetition (SRS) to really strengthen what you have learned before.

Zizzle is an excellent app for learning Chinese. Despite some initial doubts, I must admit that learning characters through stories is a unique way of remembering them!

I researched on the internet to see if there were any scientific studies on this kind of learning, and yes, there were indeed a few sites that confirmed that you can learn faster and better by associating images and stories to what you are learning. As I have already mentioned, some of the associations, images, and stories in Zizzle app can come across as strange and hilarious, but this is actually a positive thing. Because the stranger the association, the more the learner will remember it, and thus, will also remember the character!

The App allows for a free 7-day trial to get a feel for how it works. After the trial period is over, you can choose to continue learning by either purchasing Zizzle Character Packs or Zizzle Subscriptions.

The Character Packs give you lifetime access to selected characters, words, phrases, audio, and quizzes inside chosen decks, with each pack worth US$49.99. These packs are the “Chinese Textbook Companion,” “Master Everyday Chinese,”, “Crack the HSK,”, and “Chinese Medicine.” 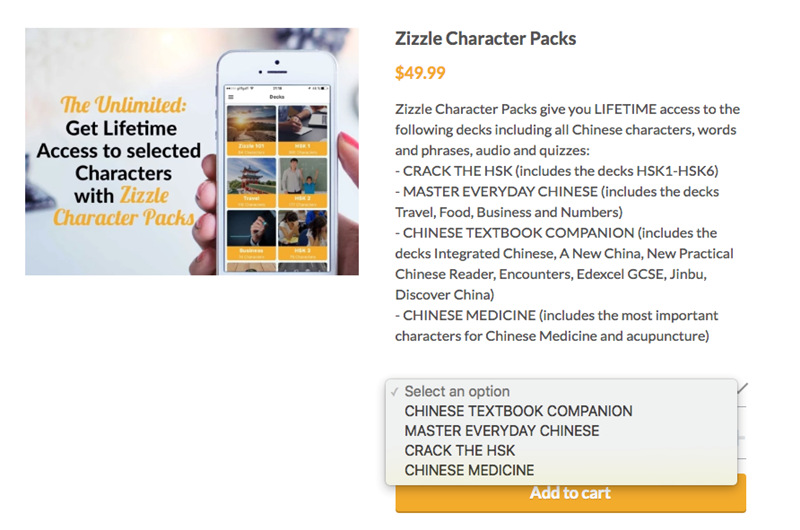 Zizzle Subscription instead offers access to all content without limitation. Right now, this includes visualized stories of 850+ Chinese characters (including any new characters), with 3000+ essential words and phrases with audio. You can choose from a 1-month to a 3-year subscription ranging from US$9.99 to US$159.99. More characters are added continuously and will then be available to the users. 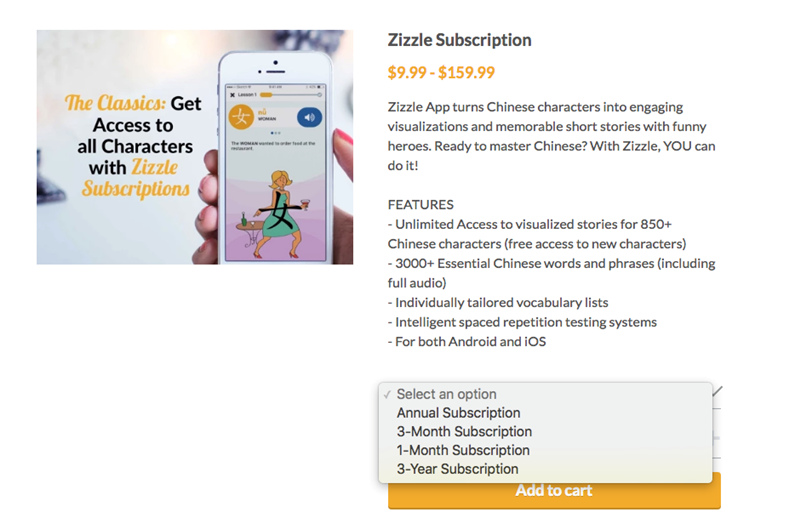 If you are convinced, use the promo code “DIGMANDARIN10” to save 10% on all three-month and annual subscriptions, as well as packs.

Try a free trial to Zizzle

What is clear is that Zizzle is a very easy-to-use app, which uses images and stories to make learning Chinese characters memorable.

For the future, I have even more expectations from Zizzle. The app currently does not teach you how to construct sentences, grammar and how to build conversations. It also does not yet offer you a glimpse into the culture behind Mandarin. If Zizzle add these features, it would actually be a perfect learning tool.

But even now, if you want to learn individual characters well, along with their meaning and pronunciation, then Zizzle is just the right app for you, especially if you are not the type rote memorization. The app can definitely help build up your Mandarin vocabulary!