Why are there ‘Simplified’ and ‘Traditional’ Chinese characters?

I know Taiwanese people use the traditional characters. The traditional one looks very beautiful, but simple one seems much easier. Should I learn both?

Both Simplified and Traditional refer to written systems of Chinese that have been used in China since ancient times. The Simplified set or style was derived from the Traditional style by the government of the People’s Republic of China circa 1949 to 1964. The majority of “common” people in China could not read their system of writing, it was too complex. As with other developments that took place during this era it was deemed necessary to make a system of reading that was easier to learn and use. Hence “Simplified” Chinese was born. Simplified Chinese consists of an entirely different set of characters with simpler strokes and making them easier to remember as well as read- but this has led to a few problems regarding their original framework.

For everyday use, both sets have been used in nearly every Chinese community at one time or another.

I learned traditional characters in HongKong. Now I can read most of the simplified characters. And some of my friends who are from Chinese mainland also know the traditional version, though they learned simplified version. I think if you already know one character version, no matter it is traditional or simplified, you will soon acquire the other. But for me, writing is a problem.

I prefer the traditional character. it`s more beautiful and meaningful. 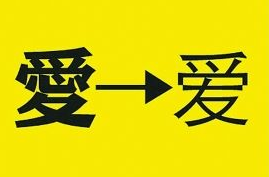 It`s love. But how to love even without a heart?

I think pick one to start.  Don’t try to learn both right away.  I learned simplified in china, now I live in japan and the Kanji in the japanese writing is almost always traditional characters so I’m kicking myself.

Simplified are used in China, mainland, while traditional Chinese are used in HongKong, TaiWan,Macau.

If you are going to learn Chinese, simplified Chinese is more recommend, because it is easier to learn and used more widely.

Traditional Chinese is the writing system that Chinese-speakers have used for thousands of years. It’s a very COMPLICATED writing system. These characters have grown very subtle and complex over the years, and learning to write Chinese is a challenge even for Chinese natives. For foreigners, even trained translation services providers, it can be a very difficult process indeed.

Simplified Chinese is exactly that – simplified. Promoted after World War II by the People’s Republic of China, the Simplified Chinese script originally was no different from Traditional Chinese in terms of vocabulary, just in the fact that most of the characters used to write out the language were literally simplified.

To my personal experience, many people versed in one writing system can usually read the other fairly easily. Choose one you like to start with – in this case, Simplified might be easier for you.

Difference between traditional and simplified Chinese

Advantage: The traditional Chinese, most of them are hieroglyphic. It conveys more significant than simplified Chinese. Here are some examples:

乡 xiānɡ (Native place ): When i return to my native place, but my darling (郎lánɡ) is gone.

Disadvantage: It is not good for spreading the Chinese culture. After characters simplified, lots of Chinese people cannot read the ancient classical literature. It also lost the original aesthetic of the traditional Chinese characters.

Traditional or simplified Chinese, which one is better to learn?

After comparing the traditional or simplified Chinese, you may have a basic understanding about them. Choose the better one according to your specific learning needs:

If you are a Chinese learning beginner and if you are going to use Chinese in mainland, you had better learn simplified Chinese. It is easy to recognize and write.