Millions of people all over the world study Mandarin Chinese as a foreign language. However, hundreds of millions are still diverted from learning it by misconceptions and stereotyping.
This article explains why some commonly held myths about learning Mandarin Chinese should be forgotten. It is not much more difficult than any other language.

Myth 1: You can achieve high proficiency level in Mandarin Chinese if you start learning it in childhood

Truth: Children don’t memorize Chinese characters quickly and easily as it is supposed. Many studies have consistently demonstrated that adults perform even better than kids under the same conditions. It is typically asserted that older learners’ brains are less flexible. However, adults’ ability to build strong motivation for subject outweighs all disadvantages.

For me, the main message behind this myth is that children don’t have all that knowledge about complexity of Mandarin. Just forget it and you will get the kids’ benefits.

Truth: The difficulty of Chinese words seems to be overestimated. Every Chinese character has its meaning and then used as a part of other words.

In English there are words “apple” and “mango”. Letters used in both words have no meaning on their own. We just have to memorize that it is written “a-p-p-l-e” (not “a-p-l”). In Mandarin they say “苹果” for apple and ”芒果” for mango. “果” means “fruit” so it is easy to get the meaning.

You don’t need to learn new characters every time you learn a new word. After learning about 150 most commonly used characters a student can use them as “building blocks” for other words.

Moreover, you will probably love the beauty of some words and how logical is their etymology.

As a conclusion of this passage, good memory is not a must. It is Mandarin that helps to improve memory – whatever is your age!

Myth 3: It is impossible to sound like Chinese due to the difficult tones

Truth: Mandarin is a tonal language. Practicing Chinese four tones is necessary but pronunciation in any language needs practice, too.

The good news is that the number of syllables in Mandarin is very limited. Some people think that each Chinese character has its own pronunciation and students have to learn endless number of sound combinations. It is completely wrong!

In the chart below you can see pinyin transcription for all possible Chinese syllables. The same transcription is used for dozens of characters so no worries about this!

There are no complicated pronunciation rules like in English (oo = [u]) or in French (eau = [o])!

Myth 4: Mandarin is completely different from other languages; nothing in common with European languages

Truth: Mandarin Chinese has many distinctive features but you will be surprised by some similar concepts.

Basic grammatical terms are the same. There are nouns, adverbs, verbs, prepositions, etc. The sentence structure has much in common with other languages.

Moreover, some proverbs and idioms have straight forward translation into English and Russian (I am sure there are even greater examples in other languages).

Myth 5: It takes years to be able to speak Mandarin on basic level

Truth: Mandarin grammar is much simpler than that of most European languages. There are no articles (like in English), genders (like in German and French) and cases (like in Russian). The verb is not changed to express the tense. The time of the action is indicated in the context.

Here is an example of reported speech in English and in Mandarin:

他说他的妈妈生病了. – He says that his mother was ill.

Literally: He + to say + his + mother + to get ill + particle 了 indicating action in the past.

Truth: calligraphy is an art and people who are really talented at it are quite rare (even in China). Nowadays, you don’t need to learn writing with a brush. Many foreigners are satisfied with learning just typing in Mandarin on a computer. Typing with pinyin romanization is easy. It looks like a test with several answer options:

You just insert “ming” and that’s what you see: 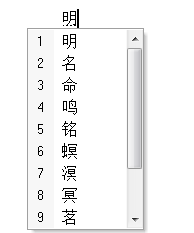 Then you make a right choice and the required character appears on the screen!

Myth 7: Living in China is necessary for learning Mandarin

Truth: Of course, it is always good to practice what you have studied in everyday life but even if you have no such a possibility you still can improve speaking skills. Learning via Skype and other similar tools is very helpful since you can be guided by a native speaker.

Myth 8: Learning Mandarin is waste of time since it will never substitute English as global language.

Truth: I am pretty sure that English will retain its role as a global language but anyway the knowledge of Mandarin gives you amazing career opportunities. In terms of business, China will definitely remain the biggest market for years (credit trisha). Knowledge of Mandarin is a great foundation, especially when paired with other skills (business, computer science, design, engineering, etc.).

At the very beginning of my studies I often heard: “Are you going to learn Mandarin? Oh, you are crazy! It’s impossible!” Now people exclaim: “Wow! Do you speak Mandarin? It’s unbelievable!”

I would say it is neither impossible nor unbelievable. Just try it! Hopefully, some of you will find my Facebook page useful.