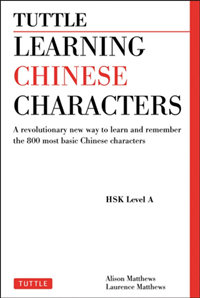 A year into my Mandarin studies and it is becoming harder and harder to remember what each character means and how to pronounce it. The only method that has proven effective for me is repetition, but it is an extremely time consuming method. Therefore I have resolved to find alternative ways to help me remember the characters, starting off with this Learning Chinese Characters.

Originally it was published to help students study for their HSK Basic exam, which is China’s standardised test of Mandarin for non-native speakers, meaning that it covered 800 characters and 1,033 words that is examined. However, the HSK exam has now changed so I am not sure whether or not the book will be updated to follow the new guidelines. Nevertheless it still covers the essential characters that you’ll need to know so even if you are not taking the HSK exam, (like me), the book is still straightforward to follow.

In their stories a wheel is used to indicate that the character the story is linked to is a basic building block. In order to remember how that character is pronounced a soundword is used, and the general rule is that the first syllable of that soundword corresponds with the Chinese syllable (as one character is only one syllable long) – but this is properly and clearly explained more in the book. The tone of that character is also indicated within the story as the authors incorporate an archetype to it:

Even special cases are considered – for example女, of which the pīnyīn is ‘nǚ’, and since this sound does not occur in the English language the authors change the setting of the story (which is indicated by a symbol) to help the reader realise that this character is special. 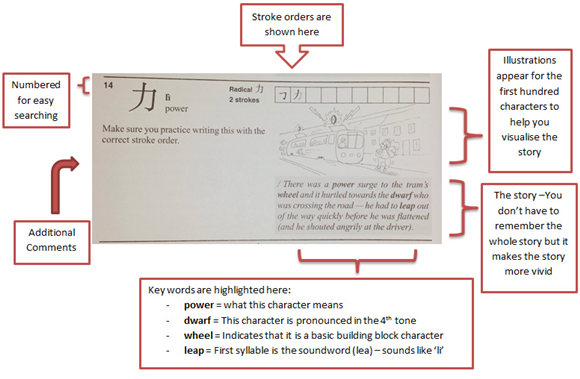 Once you are taught the basic building blocks required the book then teaches you how to form them into composite characters. In the story they include the meaning of the blocks into it. 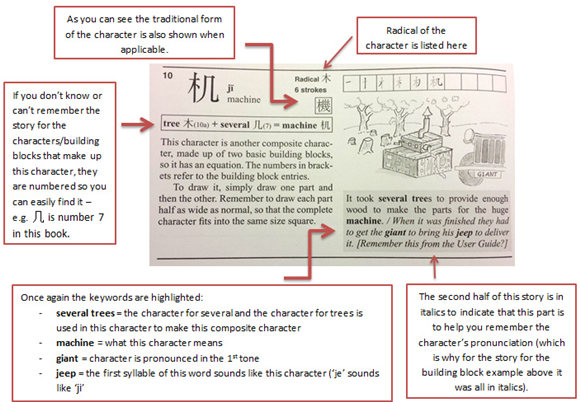 – Includes stroke order of how to write each listed character.

– In each of the composite characters it also tells you what is the radical of that character.

– Even though the characters are listed separately if it means a different word when it’s put together with another character (i.e. they are compounds), at the bottom of that character listing all the compounds are listed – for example underneath the entry for ‘文’ (which means culture), ‘日文’ (meaning (written) Japanese) is listed underneath as ‘日’ was already introduced earlier in the book.

– The book is well laid out, and it is very easy to look up particular characters.

– Even though this book is focused on simplified Chinese, the traditional form of that character is listed in the entry (when applicable)

– Although anyone can use it, it is tailored towards the (now outdated version of the) HSK exam – as some words, such as ‘木’ (tree) is listed as it’s building block, but as it’s not officially in the HSK Basic exam, or HSK Level A as the authors call it, there is no story to come with it.

– Since I have been learning Mandarin for a while already, I thought I could just skip to the characters that I needed to learn at that time. However, as I was not familiar with this it was very confusing to use.

– It may help you translate from Chinese to English, but it is more difficult trying to apply this method in translating from English to Chinese as you would have to think in reverse.

– You might find the stories a bit too childish – especially as they use a giant/fairy/teddy/dwarf/robot in the stories.

At first I was sceptical of this book – I thought I would never remember any of these stories and I would just be creating more work for myself. However, I gave it a try and I am now glad that I purchased this book! I would definitely recommend starting from the beginning and working your way through it rather than skipping to particular characters. However, make sure that you make the time to do so as you will have to commit to it and study at a regular basis. The stories really do help, especially with the pronunciation aspect of it as I’m constantly forgetting with what tones they’re supposed to be in! If you are struggling with your reading skills this is definitely a book worth investing in.

If you have any other questions about the book or if you have tried using this book and want to share your views on it, please comment below!

Clara Lee is a British Born Chinese student at the University of Kent studying Politics and International Relations with a year in Hong Kong/China. She is also taking a Mandarin course at her university and has been studying it for the past year, so she is still in the learning process! In her free time she runs a blog about Mandarin, Chinese food and culture.