Chinese New Year, also known as Lunar New Year (农历新年 nóng lì xīn nián) is seen as the most important time of the year in Chinese culture. To celebrate the festival, there are various rituals and customs that the Chinese people follow, one of which is to visit family and friends. Chinese New Year is an opportunity to reunite with family, friends, and loved ones. In practice, visiting them at their homes is a custom called 拜年 (bài nián).

During these visits, it’s common practice for people to dress in red, as this colour symbolizes ‘good luck’. Generally, people exchange festive gifts, while senior members of the group will give out ‘red envelopes’, which are in fact cash gifts, to the more junior, unmarried members of the family. This act is considered as ‘sending good luck’ to others. Furthermore, everyone would greet one another with New Year blessings, wishing each other good fortune, health, and wealth.

Be aware, though, that there are some gifts that are taboo, and which you shouldn’t bring at all. Here’s a handy list of gifts to be avoided: ‘Giving Gifts to Chinese People: Beware of Certain Taboos’. Always make sure that you are giving the right gift so that you will not accidentally insult anyone.

Greetings During the New Year of the Pig 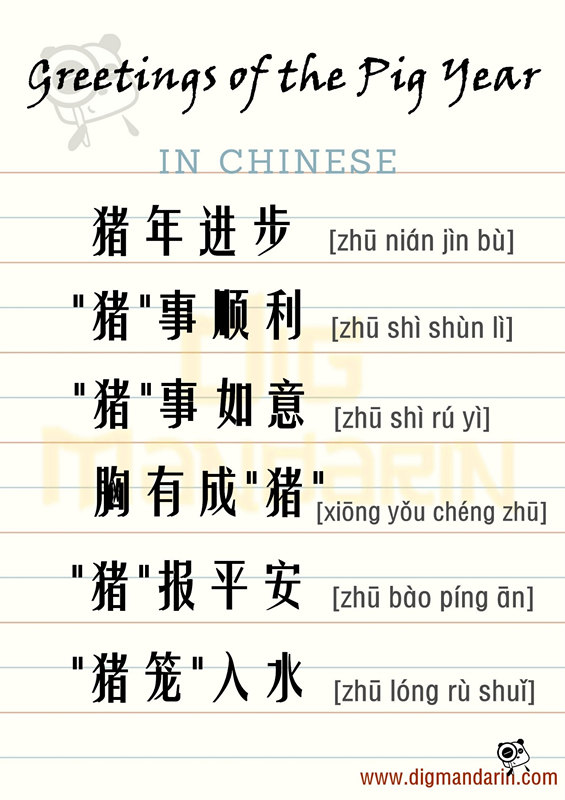 ‘‘May you make progress in the Year of Pig’’

‘猪年’ represents ‘the Year of Pig’, and ‘进步’ means ‘to improve’. This statement is a general greeting and is applicable in various situations during Chinese New Year.

“May all things work out smoothly”

‘诸事’ refers to ‘all things, different things’, and ‘顺利’ means ‘smooth’. The phrase can be used to greet people of all ages. ‘诸 (zhū)’ shares the same sound as ‘pig, 猪 (zhū)’, therefore it’s particularly popular to be used in the Year of the Pig.

“May all things go as you wish”

Similar to ‘诸事顺利’, the word ‘诸’ from ‘诸事如意’ also takes the exact pronunciation as ‘pig’, which is ‘猪 (zhū)’.This makes it suitable to be used during the New Year of the Pig. Yet, ‘如意’ has a slightly different meaning from ‘顺利’, which means ‘as one wishes’.

“May you be peaceful and safe”

The phrase is a traditional idiom that people used when sending mail back home to reassure their family that everything was well and peaceful after being away from home for a long time. Nowadays, the phrase is a nice blessing to wish someone peace and safety. ‘竹 (zhú)’ has a similar sound to  ‘猪 (zhū)’, which means pig, therefore it is particularly appropriate to be used this year.

“May you have a well-designed plan for all things”

‘事事’ equals to ‘everything’, and ‘胸有成竹’ is a traditional idiom indicating one has a thorough plan in advance before any kind of work. This is a nice saying especially between businesses or corporations. Also, ‘竹 (zhú)’, having a similar sound to ‘pig, 猪 (zhū)’, makes it more meaningful for the Year of the Pig.

“May wealth flow in”

This saying is more often used among Southern Chinese. ‘猪笼’ literally means ‘pig cage’, while ‘入’ and ‘水’ mean ‘enter’ and ‘water’ respectively. ‘Water flowing in a pig cage’ symbolizes wealth flowing into your pocket, therefore it’s a good way to wish one wealth and prosperity. In particular, the phrase consists of the word ‘猪 (zhū), pig’, so this year is the right time to use this greeting.

As was mentioned, Chinese New Year is a time for families and friends to reunite and get-together in happy gatherings. It is traditionally a joyful time for everyone, and it is also a time for renewal and hopes. Since it is a new year, it is also a time to start over and make things better in our lives moving forward.

We at Digmandarin wish you all a wonderful and joyful Year of the Pig! 祝大家猪年快乐!

Passionate about teaching and as a Chinese speaker, Winkie is also qualified with the Certificate of Proficiency in Putonghua by the Hong Kong Examinations and Assessment Authority. She's now dedicated to offering Chinese lessons on ChineseQQ, via Skype and face to face. Her students are from various backgrounds, levels and ages.