When it comes to writing Chinese stroke order is surprisingly important. The Chinese take great pride in their language, which includes the complex writing system.

I remember my Chinese teacher cringing every time I used the improper Chinese stroke order for a character and shrieking “倒插笔 (dào chā bǐ)” in my ear. The sole meaning of the phrase“倒插笔” is to criticize someone for using improper stroke order. Other phrases often heard in elementary classrooms are “乱写!(luàn xiě)” or “writing crazily” and “写错了! (xiě cuò le)” which is “You wrote it wrong!”

So, why is Chinese character stroke order so important?

First, let’s talk a little bit about strokes themselves. As you can see from the graph below, there are 11 basic strokes that comprise all Chinese characters. 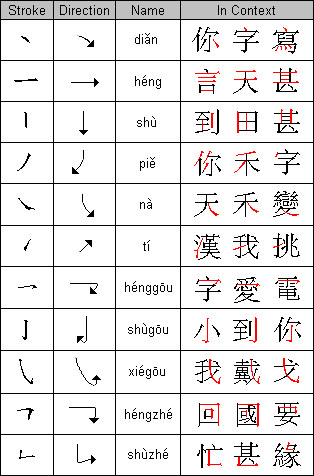 Using the wrong stroke order or direction would cause the ink to fall differently on the page. You can see that the “捺 (nà)” stroke has starts out thin, but thickens and thins out again in an elegant sweep. Should you write it backwards, you would not have the same effect. Don’t believe me? Try writing the letter “S” on a piece of paper. Now try recreating it, but start from the bottom instead. Do you see how you lose some of that natural flow?

The Chinese have always believed in balance and harmony. For example, when one fell ill, he or she was thought to have an imbalance of yin and yang in his or her body system. Traditional Chinese medicine was produced to restore balance.

Similarly, the Chinese stroke order system was designed to produce the most aesthetical, symmetrical, and balanced characters on a piece of paper. Furthermore, it was also designed to be efficient – creating the most strokes with the least amount of hand movement across the page. You may notice that all Chinese characters fit neatly into a square box. None of them skew dramatically to one direction or the other, which again reflects how much we value symmetry and balance. 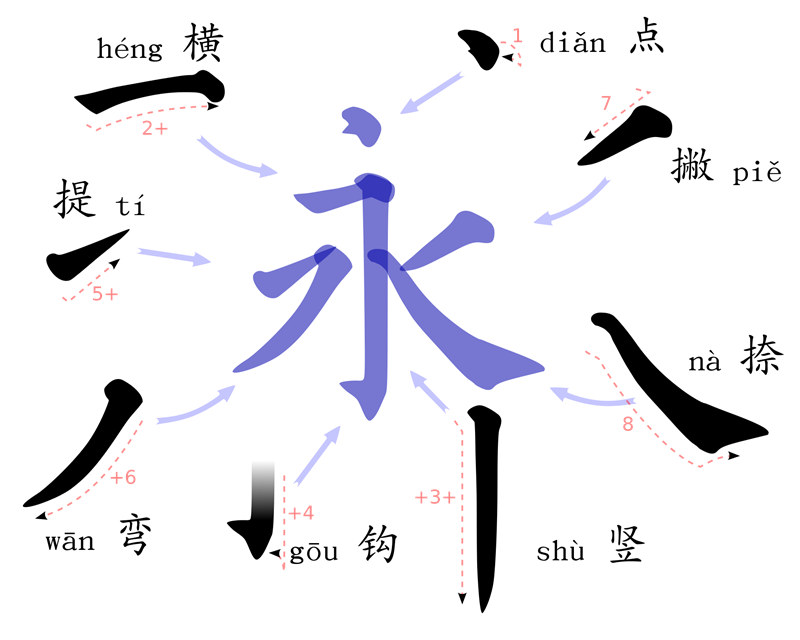 When children are learning to write at a young age, Chinese stroke order is often taught to them using the “Eight Principles of Yong,” which are the 8 different strokes combined in this one character. Frequent practice of this character can improve basic handwriting.

When a Chinese character is “stacked” vertically, like the character 立 (lì) or “to stand,” the rule is to write from top to bottom.

When a Chinese character has a radical, the character is written left to right. The same rule applies to characters that are stacked horizontally. Take a look at the “吃 (chī)” example below, which means “to eat.”

When you are writing a character that is centered and more or less symmetrical (but not stacked from top to bottom) the general rule is to write the center stroke first. Check out the character “小(xiǎo)” which means “small.”

Horizontal strokes are always written before vertical strokes. Check out how to write the character “十(shí)” or “ten.”

My mom used to teach me this concept by saying “you want to fill the closet before you close the door.” After you write the middle strokes, close the frame, such as in the character “回(huí)” or “to return.”

There are always small exceptions to the rule, and Chinese stroke order can vary slightly from region to region. However, these variations are very miniscule; so by following these general tips, you’ll have an astute grasp on stroke order!

Personal handwriting is also important in Chinese culture. In Chinese, we have a saying called “字如其人(zì rú qí rén),” which means “the handwriting reflects the person.” According to my harshest handwriting critic, (my mother) my handwriting says that I am “disorganized, daring, and a little out of the box.” Clearly, I need more practice. What do you think your Chinese handwriting says about you? Hopefully with these tips, you’ll be on your way to improving your handwriting!

Sara Lynn Hua is a Chinese language researcher for TutorMing. She grew up in Beijing, before going to the University of Southern California (USC) to get her degree in Social Sciences and Psychology. She writes for TutorMing's blog. When she's not reading up on Chinese etymology, she enjoys crafting and painting.